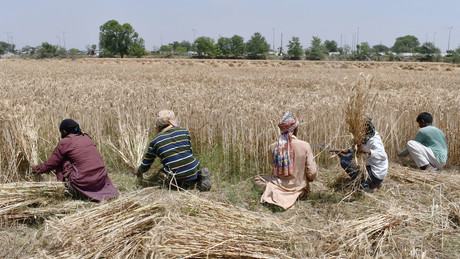 The persistently high food prices around the world mean an existential crisis, especially for the poorest parts of the world’s population. The President of the World Bank warns that prices could remain at a high level for months.

US President of the World Bank David Malpass warned on Wednesday that the global food crisis will last for several months and likely stretch into next year, China’s Xinhua News Agency reports. Republican Malpass attributed global price increases to the war in Ukraine, which has pushed up food prices, with the poorest sections of the population suffering the most.

During a virtual press conference as part of the Spring Meeting of the International Monetary Fund (IMF; english IMF) with the World Bank Group, Malpass explained:

“Above all, the war and its consequences burden the poor people in the world.”

He pointed out that food prices have already risen by 37 percent year-on-year in 2021/2022. Food prices are rising faster than the consumer price index, which is “significant” because it shows how badly the poor are affected, who spend a larger proportion of their budgets on food.

The World Bank President said that shortages of food, energy and even fertilizers, which are essential for planting crops in the next agricultural cycle, are creating a “food insecurity crisis that will last at least a few months and probably extend into next year”.

“The food problem is serious…Prices drive the poorest out (from the food market) so it is people in poor countries, especially in rural areas, that are hit hardest. There is also a tendency to consume less nutritious food when there are no other foods on the menu.”

A positive aspect of the current crisis is that there are large global reserves of food. If these are released over time, the crisis can be mitigated.

The World Bank chief noted there were “substantial” talks on food safety during Tuesday’s spring meeting of the IMF and World Bank, but expressed skepticism about the possibility of an international understanding on the issue. Instead, he relies on national solutions:

“I hope and expect that many countries will help alleviate the food and fertilizer crisis with individual solutions.”

Malpass said the World Bank expects to lend $170 billion (€155 billion) over the next 15 months in response to the food crisis. That would be the largest lending program in the history of this international lender.

The US economist also called on politicians in all states to improve the distribution of capital in global goods, as the current distribution leads to deep and worsening inequality:

“That means more countries are falling further behind, not making progress and not making the necessary investments. This is partly due to the macro policies of advanced economies. They have borrowed very heavily into global capital markets, leaving less for other countries to do.” remain.”

This circumstance could be improved, so Malpass.