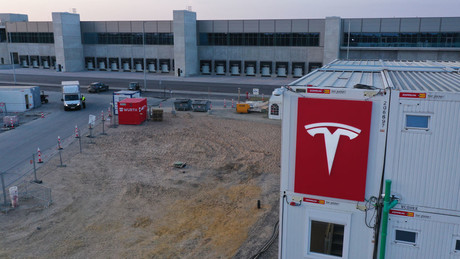 In the Tesla plant in Grünheide, larger quantities of chemicals leaked for the first time, but according to the company they did not get into the ground. This representation is now being contradicted by environmental organizations and the ÖDP party.

In the last week, 15,000 liters of car paint ran out in the Tesla factory in Brandenburg. Various media reported on the incident for the first time on April 14 – the Tesla location is in a drinking water protection area in Brandenburg. The factory of the US electric car manufacturer was only opened on March 22, 2022. The Berlin BZ quoted on Thursday last week the spokesman for the responsible state environmental agency (LfU) with the words:

“No water-polluting liquid escaped into the open air or onto the ground. There was no danger to the environment or the neighborhood.”

According to official information, the incident occurred within the Tesla company building. “When filling a container in the paint shop, a liquid leaked out on Monday evening because a valve was not completely closed,” said the spokesman for the LfU. In the meantime, however, the responsible authorities are contradicting themselves when it comes to the information on the danger and the consequences of the chemical accident. Tesla “reacted correctly to the operational disruption, which was reported verbally on April 12 and then reported in writing on April 14,” he said information of the Berlin daily mirror.

The BZ explained in a subsequent article that “after the paint was vacuumed off in the factory, ‘two to three liters’ leaked out when the hoses were removed,” according to more recent statements by the Federal Environment Agency. However, the pool caused is to be estimated larger. Furthermore, the BZ writes:

Due to the high-risk location in a water protection area, the environmental associations Green League and Nature Conservation Union as well as the Grünheide citizens’ initiative are now demanding immediate clarification, according to the Tagesspiegel article. The Ecological Democratic Party (ÖDP) even sees the need for “a production stop”. The broadcaster rbb reported on April 19:

“Last week, the Brandenburg State Environment Agency reported incorrectly about a leak in the factory of the US car manufacturer Tesla in Grünheide (Oder-Spree). This is based on statements by the Oder-Spree district.”

The newspaper Automobilwoche quoted Excerpts from a press release by the ÖDP:

According to a press release, the ‘fault’ at Tesla was more serious than previously known. The liquid reached the hall doors. Some of it probably even seeped away. The ÖDP asked Tesla to stop operations until a comprehensive accident prevention exists.”

This gives new fodder to the ongoing discussions and critical expressions of displeasure about special rights and official perceptions around the Tesla company premises. The Berlin newspaper wrote at the beginning of the week:

“‘Watering the lawn is forbidden.’ This is something that is making headlines in the region east of the Berlin city limits. Water is becoming increasingly scarce there. So scarce that the Strausberg-Erkner Water Association (WSE) will now impose the first sanctions. The idea: water wastage should be The WSE is also the water association in whose catchment area the new Gigafactory of the US car manufacturer Tesla is located. An investment of billions by Elon Musk, which uses as much water as a small town.”

The WSE showed is now “outraged about the incident at Tesla in Grünheide – ‘Behaviour of the authorities is a scandal'”. Steffen Schorcht from the Grünheide citizens’ initiative expressed concern to the Tagesspiegel:

“Water-polluting substances are used in this plant. Our fears that it should not have been built here are confirmed.”

In addition, the Brandenburg ÖDP has published photos – taken on April 12 by an employee of the Strausberg-Erkner water association (WSE) in the plant from a car – which show a liquid bound with a brownish binding agent outside in front of the paint shop, as well as vehicles from the Tesla company fire brigade, so information of the article. The responsible LfU would have communicated “further details” with a delay. The article in the Tagesspiegel says:

“The leaked liquid is about 15 cubic meters of treatment bath from the electrocoating. It is still not disclosed which chemicals are involved. According to the LfU, an inspection of the LfU was carried out on April 12.”

Just under a thousand meters away from the site is the Hohenbinde main well of the Strausberg-Erkner water association, with an annual capacity of 5.6 million cubic meters. “If that should fail, there is a risk of a supply emergency in the region,” said the spokesman for BI Grünheide. According to the drone photos available, it cannot be ruled out “that chemicals have seeped away next to the road.”

The Nature Conservation Union and the Green League have now formally objected to the main approval for the Tesla factory. Both institutions criticizethat the state environmental agency (LfU) continues to refuse to release the administrative files and the blacked-out passages of the approval:

“The LfU sees no reason for consequences against Tesla because of the events.”