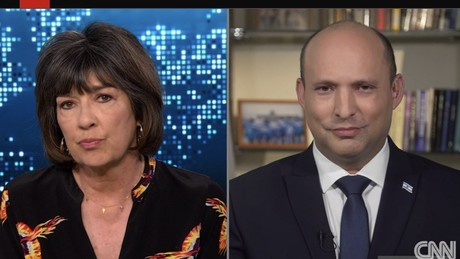 After the situation between Israel and Russia had deteriorated due to the Israeli foreign minister’s recent statements on the Ukraine war, the Israeli prime minister again intervened at Zelensky’s request as a mediator between Moscow and Kyiv.

Ukrainian President Vladimir Zelensky has asked Israeli Prime Minister Naftali Bennett to meet with Russian President Vladimir Putin in Moscow, Bennett told Christiane Amanpour in a television interview on Wednesday evening CNN. While prospects for an early end to hostilities do not look good, Bennett said, adding that Israel is ready to resume serious mediation efforts at Zelensky’s request. The news comes days after the recent sharp deterioration in relations between Russia and Israel.

The UN recently passed a resolution suspending Russia’s membership of the UN Human Rights Council. Israel also voted in favor of this resolution. Israeli Foreign Minister Jair Lapid accused the Kremlin leadership expressly cited “war crimes” as justification for this position on the suspension of Russia’s membership of the UN Human Rights Council. The Foreign Ministry in Moscow subsequently released a statement calling Lapid’s comments a poorly disguised attempt to exploit the situation in Ukraine to divert the international community’s attention from the Palestinian-Israeli conflict. The Russian Foreign Ministry statement said:

“As you know, the Israeli government, in violation of numerous decisions of the Security Council and the UN General Assembly, continues the illegal occupation and creeping annexation of the Palestinian territories.”

“The Gaza Strip has essentially become an open-air prison, whose two million people have been surviving under the conditions of Israel’s sea, air and land blockade for nearly 14 years.”

In reference to this, the Israeli Ambassador to Russia Alexander Ben Zvi was summoned to Moscow. In an interview with the Russian News Agency TASS After his diplomatic talks at the Russian Foreign Ministry in Moscow, Ben Zvi said Israel was still ready and would consider it “a great honor” to host a summit between Putin and Ukrainian President Zelensky in Jerusalem.

Observers of the political scene in Israel assume that Bennett and Lapid have agreed on a division of tasks: the right-wing conservative Israeli head of government as a pragmatist, his liberal foreign minister as an idealist. Following this pattern, Lapid openly condemns the Russian operation in Ukraine, while Bennett, for tactical reasons – given the Iranian presence in Syria – tries to maintain his neutrality on the Ukraine issue.

Asked by CNN whether Israel has taken a strong enough stance on Russia, Bennett gave up his neutral stance, saying Israel has repeatedly condemned “Russian aggression,” including by voting to suspend Russia from the UN Human Rights Council .

In the wake of the renewed unrest on Temple Mount, Russian President Putin telephoned Palestinian Authority President Mahmoud Abbas on Monday. Putin reiterated Russia’s firm position in support of the Palestinian people’s rights and affirmed his political support for the Palestinian cause in all international fora.

Russia is unhappy that Israel is on the side of Ukraine in the war. Moscow is trying to put pressure on Israel through the so-called Palestine map, which Russia recently sharply criticized for its actions on the Temple Mount, a senior diplomatic official said source the Jerusalem Post on Wednesday.

More on the subject – Zelensky: Ukraine will be a “great Israel” after the end of the war