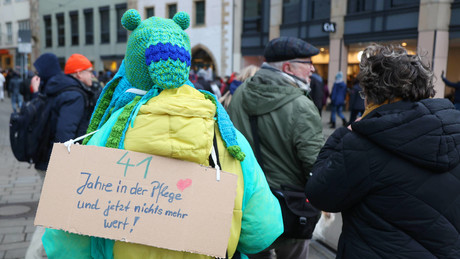 The institution-related vaccination obligation exacerbates the nursing shortage in Germany. Tens of thousands of workers are now at risk of losing their jobs. Remedy by the Federal Constitutional Court is not in sight, despite questionable evidence: it has rejected the majority of over 200 complaints.

The vaccines against COVID-19 do not provide any significant protection from others, their safety remains controversial, and they have not been approved in the long term to this day. Nevertheless, the so-called vaccination certificate obligation for employees in health professions came into force on March 16th. Those who are not vaccinated are now threatened with fines and bans on entry. The nursing shortage that has existed for a long time is likely to worsen.

According to Government response At the request of the AfD parliamentary group, 96,000 nursing staff across Germany have already registered as looking for work in connection with the introduction of this measure. According to SWR research, the health authorities in Baden-Württemberg alone were around within the first week up to March 23 17,000 unvaccinated workers reported in clinics and nursing homes. The daily News reported In mid-April, 4,700 registered nurses without proof of vaccination in Berlin.

It is difficult to get a nationwide overview here. Because the reported cases are recorded regionally by the health authorities. However, if you extrapolate the numbers from Baden-Württemberg and Berlin based on the residents there for the whole of Germany, you get an estimate of more than 100,000 people nationwide who are probably affected.

Karlsruhe: Severe side effects in individual cases are to be accepted

But despite the threat of serious deficiencies in the care of those in need of care, the unvaccinated cannot hope for the Federal Constitutional Court (BVerfG) for the time being. On February 10, the highest federal judges ironed out an example constitutional complaint initially in an expedited procedure. They did not give a date for a final decision.

The BVerfG states that compliance with the so-called vaccination certificate obligation can lead to physical reactions. The intervention could “at least temporarily impair your physical well-being,” it says. And the court goes on to say:

“In individual cases, serious vaccination side effects can also occur, which in extreme exceptional cases can also be fatal. (…) However, the law does not inevitably require those affected to be vaccinated. For those who want to avoid vaccination, this can be temporary be associated with a change in the previous activity or job or even with the abandonment of the profession.”

In other words: If employees do not want to take the risk of serious or fatal side effects, they should change jobs and, if necessary, accept unemployment. It is said that they can be expected to do this until the main hearing in Karlsruhe. The “protection of vulnerable groups” weighs more heavily. They did not cite medical evidence for the foreign protection they suggested.

169 out of 210 constitutional complaints dismissed

Constitutional complaints are an important democratic instrument. If people feel their basic rights are being affected by a new law, they can appeal. However, the BVerfG may even reject complaints without justification. Now that it has created a precedent, it apparently does the same with all other submissions against the nursing vaccination requirement. And there are many of them.

By April 19, a total of 210 further constitutional complaints against the facility-related obligation to provide evidence under Section 20a of the Infection Protection Act (IfSG) had been received, explained BVerfG spokesman Pascal Schellenberg at the author’s request. So far, Karlsruhe has “not accepted for a decision” 169 of these complaints. Schellenberg further announced:

“A total of 41 proceedings are currently still pending. With a decision dated February 10, 2022, the First Senate of the Federal Constitutional Court rejected an application for an interim order, with which the complainants sought to temporarily suspend the implementation of the institution- and company-related obligation to provide evidence.”

Schellenberg did not give any hope that the problem would be resolved quickly. Rather, he explained: “A decision date in the main proceedings is not yet foreseeable.”

Meanwhile, the Bundestag is continuing to discuss compulsory corona vaccination in health professions. At the request of the CDU/CSU and AfD parliamentary groups, experts are to be there on April 27th belongs will. The Union faction only demands a nationwide uniform implementation of the law. For example, labor law issues need to be clarified. The AfD faction is pushing for the law to be suspended.

No proof of medical necessity

In all of this, questions about the medical necessity of the encroachment on fundamental rights remain unanswered. Even the statements of the Robert Koch Institute (RKI), on whose expertise the pandemic has been based, raise serious doubts. On his Website currently assesses the effectiveness of the vaccine as low. On March 18, it found that the omicron variant caused more than 99 percent of all corona cases. And it states:

“The studies to date show that the effectiveness of the COVID-19 vaccination against any infection and against symptomatic infection is reduced with the omicron variant compared to the delta variant. In people who have received two doses of vaccine so far, the effectiveness also appears drop off sharply after two to three months.”

The RKI recognizes a short-term increase in protection after a third injection, it says there. However be it

“It is still unclear how long the protection lasts after the booster vaccination. There is also insufficient data on transmission under the omicron so far, it seems to continue to be reduced in vaccinated people, although the extent of the reduction remains unclear”.

The RKI therefore admits that it has no plausible data on whether the prescribed three vaccine doses reduce the risk of infection and transmission at all. But it is precisely this assumption that underlies the facility-related compulsory vaccination and all other suggestions for further measures of this kind.

the in weekly report In any case, the figures published by the Federal Institute do not indicate any significant external protection. According to this, between March 14th and April 10th, 2022, just under 27 percent of the recorded cases of symptomatic corona sufferers of all age groups were not or incompletely vaccinated. And around 54 percent of those affected were even vaccinated three times.

For comparison: In mid-March, according to the RKI, a good 24 percent of the population were not vaccinated or only vaccinated once. 58 percent had received a booster vaccination. So the differences are minimal. The question arises as to how reliable these figures actually are. To make matters worse, the RKI only recorded just under 340,000 of a total of 5.25 million cases registered during this time for its assessment of effectiveness – 6.5 percent.

The assumption of some kind of foreign protection against “vulnerable groups” on which both constitutional judges and politicians are based is apparently based more on belief than on evidence. On the contrary: The available data contradict the assumption. Fatally, faith actually moves the proverbial mountains here – and in reality tens of thousands of unvaccinated nurses will probably soon become unemployed.

More on the subject – RT DE interview on the situation in care: “We are getting more unvaccinated people in the medical system every day”