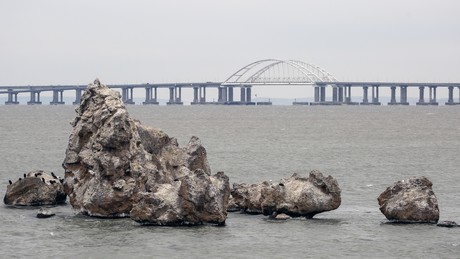 Alexey Danilov, the secretary of Ukraine’s National Security and Defense Council, did not rule out an attack on the Crimean bridge should such an opportunity arise. Kremlin spokesman Dmitry Peskov called such statements unacceptable.

The Russian President’s press secretary, Dmitry Peskov, has described the statements by the Secretary of the National Security and Defense Council of Ukraine, Alexey Danilov, about a possible attack on the Crimean bridge as “nothing more than announcing a possible act of terrorism”. Peskov noted:

“This is unacceptable because there are many indications of acts that are subject to legal scrutiny and subsequent penalties.”

“One of the persistent Ukrainian bosses said that the Crimean bridge should be scrapped. I hope he understands that he will be a target of retaliation.”

Earlier, Danilov on Ukrainian Radio NV did not rule out that the Ukrainian military could attack the Crimean bridge. He said:

“If there is an opportunity to do so [die Brücke zu treffen]we will definitely do it.”

In early April, an adviser to the head of the Crimean region, Oleg Kryuchkov, denied reports that the Crimean bridge had been mined. He described such reports as “falsifications by Ukrainian sofa warriors and the Center for Information and Psychological Operations.”

The 19-kilometer Crimean Bridge connects the Kerch and Taman Peninsulas across the Tusla Island and the Tusla Spit. Construction work started in 2016 and was completed in 2019. The structure consists of two parallel bridges – a road bridge and a railway bridge.

Kyiv has repeatedly spoken out against the construction of this bridge. In December last year, Ukraine’s National Security and Defense Council imposed sanctions on six individuals and 24 legal entities “involved in the illegal construction and operation of the railway section of the Kerch Strait.”