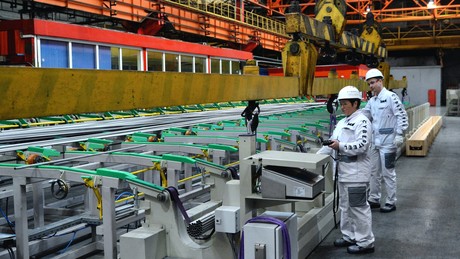 Lomonosov University professors say Russian cities with a high proportion of manufacturing workers will be hardest hit by the sanctions. The regions of Siberia and the Far East, which are linked to China, are less affected by the crisis.

The main risks for Russian regions from the consequences of the current crisis are a drop in industrial production, an increase in unemployment (latent and official) and a drop in tax revenues of regional budgets. Natalya Zubarevich, an expert in regional economics and professor at the Department of Geography at Lomonosov Moscow State University (MGU), classified these problems of Russian local authorities against the background of the sanctions pressure in a panel discussion at the “Lomonosov-Lesungen” conference on April 18.

The current sanctions crisis is in no way similar to previous economic shocks of the last decade – such as the oil crisis of 2014/2015 or the coronavirus crisis in 2020. Neither in terms of the size of the industries affected, nor in terms of the speed of recovery. According to Subarevich, the 2015 crisis was marked by an uneven decline in different sectors. COVID-19 hit the economy hard, but it was able to recover quickly. The new crisis, on the other hand, will affect everyone.

The withdrawal of foreign companies from Russia, bans on the supply of components, domestic restrictions on the export of goods (e.g. certain crops), lower demand for Russian raw materials and logistical chaos – these are all reasons for the problems faced by the regions will be confronted with, the expert predicted.

Zubarevich was particularly concerned about industrial centers where the share of manufacturing employment is high. Two-thirds of Russia’s 16 regions are responsible for industrial production, Subarevich cited data. The share of employees in the manufacturing sector is highest in the Central Federal District (mainly in the Vladimir and Kaluga regions), in the Volga region (Ulyanovsk regions, Mari El regions, Udmurtia), in the regions of the Ural “oil and gas region” (regions Chelyabinsk and Sverdlovsk) and in the North-West Federal District (Novgorod and Vologda regions).

Among the industries at risk, Subarevich singled out mechanical engineering. Apart from the direct losses that the regions would suffer from the withdrawal of foreign manufacturers – including in the automotive industry (Kaluga region) – a recession is expected for companies using imported components. This applies to the areas of transport, energy, oil and gas technology (Twer, Sverdlovsk areas). At the same time, the problems of the largest players would affect related companies in other regions.

Zubarevich also predicted difficulties for regions with a high proportion of fuel and energy companies and oil and gas companies. In the coal industry, the worst impact is in the Kemerovo region, as the European Union has restricted supplies to Europe (this market accounted for 25 percent of all Russian coal exports before the sanctions). The expert warned:

“It is impossible to divert this volume to the Asian market as the Trans-Siberian Railway is reaching capacity.”

Personal sanctions and export bans would affect steel centers focused mainly on the European and US markets (Cherepovets in the Vologda region and Stary Oskol in the Belgorod region). Because of the sanctions against Russian businessman Alexei Mordashov, his Severstal company lost the ability to export its steel products to Europe. In addition, the EU has banned imports of steel and iron from Russia, which previously brought in 3.3 billion euros a year.

The wood and pulp and paper industries have come under pressure because of the export ban to the EU. The plants in Siberia could supply pulp to China for several years. But the diversion of products that were previously transported to Europe by rail, for example from Karelia, the Arkhangelsk and Komi regions to China, is problematic.

“Of course, Far Eastern and Siberian regions that have trade ties with China would be less affected. Russian regions whose economies depend to a large extent on foreign companies and imported components, such as the Kaluga Oblasts, Kaliningrad Oblasts and Leningrad Oblasts, could face difficulties for their part.”

According to MGU professor Zubarevich, not only industry but also the service and commercial sectors will be affected. This sector is most pronounced in the big cities and regional centers. Those employed in this sector will face layoffs due to falling demand and consumer ability to pay. If big companies can’t afford to keep jobs at least at minimum wage, neither can employers in the service sector, the expert warned. She sees a high risk of layoffs in the Voronezh, Ivanovo, Kaliningrad, Rostov, Nizhny Novgorod and Penza regions.

By the end of 2022, according to unanimous forecasts, unemployment will be between seven and eight percent and the decline in real income will be between five and ten percent, estimates Subarevich. At the same time, she predicted an increase in hidden unemployment and underemployment as workers are transferred to part-time work and standard wages fall. As Zubarevich pointed out, their forecasts refer to the end of the first decade of April – long-term estimates are meaningless due to the rapidly changing conditions.

Anissimova agreed that in the uncertain situation, forecasts quickly become outdated. She said:

“The year’s outcome will depend on the exchange rate, the country’s ability to transform export and import flows and the resolution of logistical problems.”

The fact that the actual dependency of the regional economies on the foreign component is unknown adds to the uncertainty. According to Anissimowa, there is no corresponding data.

AKRA estimated that regional spending could be significantly affected by inflation, with tax revenues falling for both personal income tax and aggregate income tax (the latter includes the main taxes for small businesses) and personal income tax due to rising unemployment. Anissimova noted:

“In this case, the deficits of the regional budgets would be very large. However, according to our calculations, 75 subjects of the Russian Federation increased their account balances over the past year, which will allow them to partially fund their deficits.”

Measures to support the regions

In the meantime, the Russian authorities have already developed a number of measures to help the regions through preferential loans. The Law on Supporting Financial Stability of Regional Budgets was passed by the State Duma on April 20 on second and third readings. Up to 390.7 billion rubles (about 4.7 billion euros) will be made available from the federal treasury for household loans to refinance the debt obligations of regions and municipalities.

As announced by the Russian Ministry of Finance, the amendments to the budget law include three innovations. First, regions will be granted special conditions for receiving short-term loans from federal finance ministries: the borrowing limit will be increased to 10 percent of the region’s revenue. The second innovation is that the regions can receive additional budgetary loans at an interest rate of 0.1 percent per annum to repay their market bonds, which existed at the beginning of the current year and must be repaid in the period March-December 2022. The third block of amendments frees the regions from repaying budget debts in the current year in the amount of just over 60 billion rubles (about 729 million euros). As a representative of the Ministry of Finance clarified, this will affect 75 regions of the Russian Federation.

In addition, following a March 16 meeting with President Putin, regional governors were instructed to personally chair the operational centers for sustainable development of the regions. The government, in turn, was instructed to carry out an additional indexation of the grants as part of the financial equalization. In addition, the government, together with the regional administrations, is to ensure that the extent of poverty and income inequality in the population is reduced by 2022. The block of presidential instructions also concerns support for Russians who lost their jobs after March 1 and for families who have faced significant income losses during this period.