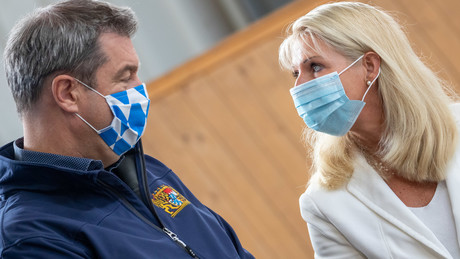 In the Corona crisis, numerous Union politicians were involved in mask deals. Now that the mask requirement is falling in many areas, new explosive details about the purchase of masks are coming to light: The wife of Bavaria’s Prime Minister Markus Söder (CSU) Karin Baumüller-Söder could soon find herself in front of the mask investigation committee of the Bavarian state parliament. The background to this is a report by Nürnberger Nachrichten, according to which the company of Karin Baumüller-Söder and her brother Andreas Baumüller, Baumüller Holding from Nuremberg, gave the Bavarian state government around 16 million protective masks of different standards in April 2020 at a price of more than 28 million euros have offered.

The explosive thing is that one day before the offer submitted by email, Söder had announced in a government statement that masks would be compulsory in retail and on local public transport. The deal didn’t materialize because the State Office for Health and Food Control had spoken out against it from a “technical point of view”. Nevertheless, numerous questions remain. Bavaria’s SPD leader Florian von Brunn therefore wants the mask committee to clarify, among other things, whether Söder’s wife tried to influence the business.

Bavaria’s Health Minister Klaus Holetschek (CSU), however, wants to rule out a connection. As is well known, the state government has called on companies, especially those with connections to China, to obtain corona protective clothing, since protective clothing is produced in large quantities in the People’s Republic.

The Baumüller group of companies with 2,000 employees based in Nuremberg focuses on drive and automation systems in the field of mechanical engineering and electromobility and produces in Germany, the Czech Republic, Slovenia and China.

When asked by the Süddeutsche Zeitung, Markus Söder’s state chancellery said that “there was never any influence”. A statement by the Baumüller Group is quoted in the Nürnberger Nachrichten report: At that time there was a call to companies in Germany to “purchase and deliver protective masks in particular”. Participated in this call. However, SPD leader von Brunn finds it irritating that the incident has only become known after two years:

“Söder, the Baumüller company and the Ministry of Health could have made everything transparent at the time.”

It is up to the committee members whether Söder’s wife and other people are summoned. Chairman Winfried Bausback (CSU) told the dpa news agency on Tuesday that the committee would jointly discuss and decide on an application for evidence, but such is currently not available.

There were already rumors and indications of possible involvement of Söder’s wife in mask deals in the summer of 2020. But so-called “fact checkers” such as von corrective, dpato the Bavarian radio and Mimikamawho primarily justified the government’s corona policy during the Corona crisis, claimed in articles at the time that the activities of Baumüller Holding were limited to donated face shields.