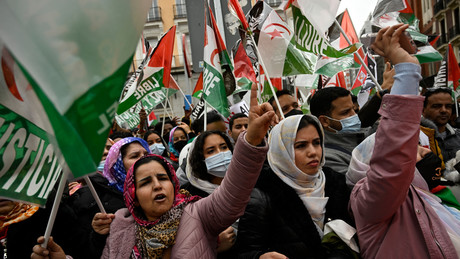 In the first days of April, Spanish President Pedro Sánchez and Morocco’s King Mohamed VI issued a joint statement announcing a summit meeting in the near future. The aim is to improve mutual relations based on mutual respect and “transparency”.

an analysis by Maria Müller

Spain, the former colonial power of Western Sahara, has never carried out a regular process of de-colonization and recognition of that territory’s sovereignty. Morocco then annexed it “de facto” from 1975 through military occupation. There was never an outcry from Europe or North America at the illegal annexation. The rich mineral resources in this “no man’s land” of the Sahara desert were too tempting. There you will find huge deposits of phosphate, the largest deposits in the world. The mineral is processed primarily for agricultural fertilizers.

“Morocco occupies Western Sahara because of its great mineral wealth,” says Jadiyetu El Mohtar, a delegate for the Polisario Front, a liberation movement founded in 1974 by the indigenous people.

“The Sahara has great wealth in various metals, natural gas, iron, copper, uranium and tellurium. There are also unexploited oil deposits, sand for cement production and for beach development. The area has the richest fishing grounds in Africa.” , he emphasizes.

Spain’s sudden move is jettisoning 50 years of disputes and multiple UN General Assembly decisions, including a negotiated ceasefire between Morocco’s military and the guerrillas. The fate of the people of Western Sahara and their right to self-determination as an independent nation should therefore be clarified in a referendum.

UN resolution on referendum was delayed

Either their separation from Morocco’s territory and their own state – or integration into Morocco’s territory under an autonomy status. The referendum was never held, Morocco, Spain and the NATO countries had no interest in it. They delayed the UN decision for decades, because an independent state might have prevented the illegal plundering of valuable raw materials that has been going on ever since. In this respect, “our” tolerated annexation was and is only a concealed violation of international law, also for the EU state of Spain.

Various decisions of the Court of Justice of the European Union between 2016 and 2019 reaffirmed that Morocco and Western Sahara are different territories and that mining and commercialization of resources without the consent of the Saharawi people is illegal. It has been shown that its judgments are not binding on EU governments or on the USA.

The armed liberation movement in Western Sahara, the Polisario Front, has been waging a guerrilla war against the annexing power Morocco since the 1970s. In February 1976, she proclaimed the Sahrawi Arab Democratic Republic (RASD), which is now recognized by over 80 countries. The RASD is a member of the African Union.

Since then, refugee camps, military attacks on civilians, torture and kidnappings by the regime of King Mohamed VI have shaped the lives of the approximately 650,000 people in this part of the Sahara who are resistant and mostly Berber tribes. According to Amnesty International Report 2021/22 on Morocco and Western Sahara, the dictatorship of Mohamed VI. freedom of expression and association, the right to privacy, freedom of assembly, the right to health, the rights of women and girls, the rights of LGTBI collectives, the rights of refugees and migrants. Torture and other ill-treatment are also practiced.

A “Berlin Wall” across the desert

In the 1980s, the regime built a wall across the desert to cut off that part of Western Sahara that stretched towards the west coast of Africa. This primarily protected the immense phosphate mines. As a result, Morocco controls nearly 70 percent of the world’s total phosphate reserves, equivalent to about 50 billion tons. Most of the production comes from the Bou Craa and Khouribga mines.

Luis Gonzalo Segura, a former lieutenant in the Spanish army, said: “Pedro Sánchez’s decision to de facto hand over the Sahara to Morocco not only brutally attacks human rights, but also contradicts the most elementary democratic principles, since it is a decision of the President who cannot even claim parliamentary or public support.”

Spain’s traditional position on the Western Sahara issue has until now, at least officially – and passively – respected UN resolutions of the past few decades.

But in December 2020, then-US President Donald Trump signed a declaration in which the US recognized Morocco’s sovereignty over Western Sahara. In 2019, half of Western Sahara’s phosphate went to the United States and Canada. But Brazil, India and China are also major importers of the mineral, which is indispensable for agriculture.

The robbery of foreign resources

Therein lies the key to understanding Spain’s unexpected change of position. The current sanctions war by NATO countries is blocking Russia’s fertilizer exports. The Russian Federation was among the world’s largest producers of nitrogen fertilizers and was the second largest exporter of potassium and phosphorus fertilizers. In 2021, the Federation sold $12.5 billion worth of fertilizer.

The US and Canada also produce large quantities of fertilizers, thanks in no small part to their phosphate imports from Western Sahara. The United States wants to compensate for Russia’s market loss with its own exports and take over its customers on the world market. To do this, they need a long-term secure access to the strategic reservesencamped in the Sahara. In addition, due to the enforced scarcity, the fertilizers reach veritable maximum prices. The US is thus reaping huge profits from sanctions against Russia – and from the illegal exploitation of mineral resources belonging to other peoples.

More on the subject – Spain gives up its neutrality in the Western Sahara conflict: will Algeria stop gas supplies to Europe?