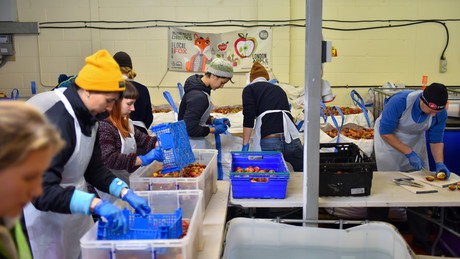 One learns a lot these days about the flight of Ukrainians across Eastern European borders. But in Great Britain, numerous Ukrainians are fleeing unspeakable working conditions on farms and describe them as “modern slavery”.

Hundreds of Ukrainians who have come to the UK on seasonal visas are trying to escape hard labor on farms, which they reportedly describe as “modern day slavery”. Ukrainians accounted for by far the largest proportion of workers on seasonal worker visas in the United Kingdom in 2021. Of the 29,631 visas issued under the T5 seasonal worker scheme, two-thirds (19,920) went to Ukrainians, the Guardian reports. Hundreds of Ukrainians are now living and working informally in the UK after fleeing farms because of poor working conditions.

A study by the UK Home Office and the Department for Environment, Food and Rural Affairs (Defra) published late last year revealed that seasonal workers harvesting fruit and vegetables under a post-Brexit pilot scheme launched in 2019 were exposed to “unacceptable” conditions. . The seasonal worker scheme was introduced because Britain feared a shortage of labor for harvesting work on farms after leaving the EU. The government report on the post-Brexit workforce cites issues such as a lack of health and safety equipment – which would be required by law – racism and housing without bathrooms, running water or kitchens.

A Ukrainian IT expert with two university degrees who fled one such company told the Guardian that she feels like a “hostage in the UK” unable to go back home because of the war but being forced to fight for her to do menial work for a living, although she is very well educated. The woman describes what she considered the “worst treatment” of her life and how she and other Ukrainian workers on the farms were disenfranchised, including by being suspended, after protesting the adverse working conditions. Many of the workers at the cherry farm where she and her boyfriend work have also fled, and most are trying to make ends meet with informal jobs in the cities.

When workers with seasonal work visas leave the UK, their options are very limited as they no longer have legal visas but there is war in their country. like dr Dora-Olivia Vicol, Director of the Work Rights Centre, the Guardian explains, many of them are then dependent on precarious jobs in the informal economy. She was “extremely concerned for the safety of Ukrainians who have had to flee exploitative working conditions on British farms”. Since they’ve been undocumented since then, according to Dr. Vicol recognize that the war in Ukraine is a humanitarian crisis and offer protection to all Ukrainians in the UK, undocumented and undocumented.

The Scottish Refugee Council estimates that there are up to 6,000 Ukrainians in the UK. Graham O’Neill, policy director for the Scottish Refugee Council, said: “It is appalling that hundreds of Ukrainians here, worried about family, friends and war crimes back home, are now destitute because their seasonal visas have expired and they are facing the… had to flee conditions on the farms”.

Seasonal workers do not fall under the two existing classes of UK government programs for Ukrainian refugees. The UK plans to start accepting applications from people from Ukraine for an extension program from May, where those on seasonal work visas who have fled farms can potentially stay for three more years. In the meantime, the British government points out that victims of such exploitation should report the circumstances to the police.

More on the subject – No more sausage for politics? – No more work contracts in slaughterhouses