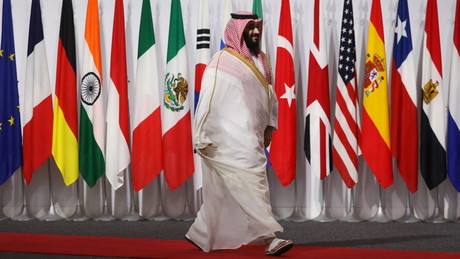 The economic fundamentals of US-Saudi Arabia relations have changed. The Saudis no longer sell much oil to the US, but are instead the largest supplier to China. The risk for the US now is that Riyadh could tie itself even more closely to China and Russia.

Saudi Crown Prince Mohammed bin Salman met with current US National Security Advisor Jake Sullivan for the first time in September. The Crown Prince is said to have yelled at Sullivan as he addressed the killing of Saudi journalist Jamal Khashoggi. The prince is said to have subsequently told Sullivan that he never wanted to discuss the matter again. Bin Salman is also said to have told Sullivan that the US should also forget that Saudi Arabia would ramp up oil production at the US request. At least that’s what it reports Wall Street Journal (WSJ) on Tuesday.

US officials have reported that the relationship between Washington, DC and Riyadh has hit its lowest point in decades, particularly after President Biden slammed the Saudi government over various human rights issues. Before taking office, US President Joe Biden had described Saudi Arabia as a “pariah state” and announced that he would hold the kingdom accountable for human rights violations and the murder of Saudi journalist Jamal Khashoggi.

Political lines of conflict have deepened since Russia’s military operation in Ukraine, senior Saudi and US officials believe. The White House in Washington had already tried in vain to persuade the Saudis to produce more crude oil in order to lower global oil prices. The Arab states on the Persian Gulf, on the other hand, want to stick to the production quotas agreed with OPEC for the oil producers listed in OPEC+. Russia also belongs to this circle. Last summer, the US President called on all Americans to blame the rising gas prices on the reduction in Saudi oil production. Saudi officials now say the risk for the US right now is that Riyadh could tie itself more closely to China and Russia, or that Saudi Arabia could at least remain neutral on issues of fundamental US interests, as it has done with Ukraine.

The US-Saudi Arabia partnership was long ago built on the premise that the US military would defend the kingdom from hostile powers to ensure uninterrupted Saudi oil supplies to the global market. In return, Saudi Arabia ensured a secure supply of crude oil at reasonable prices. But this economic basis of the relationship has changed, comments the WSJ. The Saudis no longer sell much oil to the US and instead are now the largest supplier to China, realigning Riyadh’s economic and political interests.

The WSJ comments that renewed rapprochement with Saudi Arabia will not be easy. Biden faces staunch opposition, which has already called for the US administration to reassess US-Saudi Arabia ties given the current troubled Saudi stance on domestic and foreign policy. For his part, the Saudi Crown Prince bin Salman has so far shown little willingness to withdraw from the lucrative alliance with Moscow over the control of oil production on the world market.