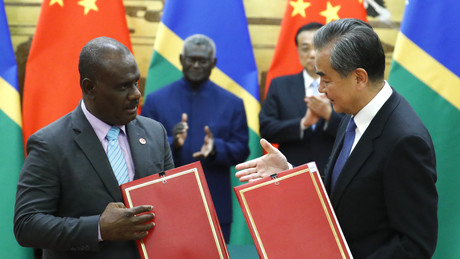 The Pacific island state of the Solomon Islands wants to diversify its partners in the field of security policy and therefore concluded an agreement with China. Various western governments were alarmed by this step and expressed strong criticism.

Chinese Foreign Ministry spokesman Wang Wenbin reiterated on Wednesday that the China-Solomon Islands security cooperation agreement is not directed against a third country. The Chinese diplomat also called on the United States to respect the Pacific island countries as independent states and not to regard them as vassals. At his daily press conference, Wang was asked about media reports about the concerns of the US, Japan, New Zealand and Australia about the new agreement between Beijing and the Pacific island nation.

According to Wang, the cooperation between the two sides is based on the principles of equality and mutual benefit. It serves to maintain social order, deal with natural disasters and provide humanitarian aid to the Solomon Islands.

The agreement is not directed against third parties and is not aimed at replacing existing bilateral or multilateral security mechanisms, the Chinese spokesman said.

However, according to the logic of the United States, the Pacific island countries could only cooperate with the United States and its allies in the field of security. Any other security cooperation is seen as a threat, Wang said.

At the end of March, the government of the island state itself reacted angrily to criticism from some western states of their own sovereign decision to cooperate with China in the security sector. Solomonic Prime Minister Manasseh Sogavare called the Western states’ attitude “very offensive”. He also asked what was wrong with his country wanting to diversify its relationships with different partner countries. Western states have branded his country “incompetent.”