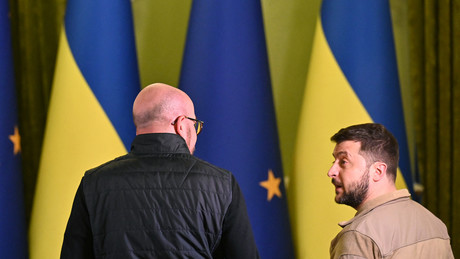 Vladimir Zelensky receives this year’s “Freedom Prize of the Media”. The Weimer Media Group credits him with “merits” as a pioneer “for freedom and democracy”. The Belarusian opposition activist Svetlana Tichanovskaya and the former Russian TV journalist Marina Ovsyannikova also received the prize.

The “Freedom Prize of the Media” award is being presented for the eighth time this year. Behind is the Weimer Media Group from Munich, which organizes the “Ludwig-Erhard Summit” at its second location in Tegernsee. The award ceremony will also take place at this event next Friday. It was not announced whether the award winners will be present, this may also depend on the condition of the protagonists.

how ntv reported, the CSU politician and chairman of the EPP group in the European Parliament, Manfred Weber, is to deliver the eulogy. The news portal quotes from the justification for awarding the media prize to Ukrainian President Vladimir Zelenskiy, which does not skimp on strong words:

“It is Ukrainians, Belarusians and also Russians who are on the frontlines in Eastern Europe against evil, against war and tyranny and are bravely defending their freedom as well as ours. With words, with deeds, with great courage – and with their lives. Germany, Europe and the world are experiencing a turning point that, since the end of the Second World War, has once again decided on peace and freedom, on truth and injustice. And it warns us: individual freedom, democracy and prosperity cannot be taken for granted .”

The jury’s praise culminates in the claim that the Ukrainian president embodies a new freedom idol, even stylizing him as a “leader” and a “charismatic” one at that:

“President Zelenskyi stands for a generation of charismatic leaders who inspire people around the world for their courage, vision and love of freedom and justice.”

Zelensky in the best of company

While things have been a little quieter lately about the Belarusian award winner Svetlana Tichanovskaya become is, the Russian television journalist Marina Ovsjannikova is still receiving attention. A few weeks ago, she became known to a larger audience in the West when, in protest against the war in Ukraine, she appeared in front of the running camera during a news broadcast in mid-March with a poster she had written herself stepped. Although her dismissal followed on the foot, but let a follow-up job as a freelance correspondent for the world was not long in coming.

As the publisher couple Weimer emphasized, the “Freedom Prize” they award is intended to honor people who – as ntv put it – “are committed in a special way to freedom of expression, social interaction, political dialogue and democracy”.

The “Ludwig-Erhard-Summit” should be seen as “ideological[s] format to promote the European idea” in the present “play a major role”.

The publishers speak of a “political[n] Discussion based on common values” and claim that “acceptance of pluralism of opinion and the debate about guidelines for global economic exchange” are “more important than ever” to them.

It is not known at this point in time whether the Erhard summit at Tegernsee will also affect the political situation opposition in Ukraine, the persecution their exponents or the closure of newspapers and television stations will address.

Everyone who has rank and name has already spoken here

More on the subject – Ukraine: Censorship, arbitrariness and the silence of the West