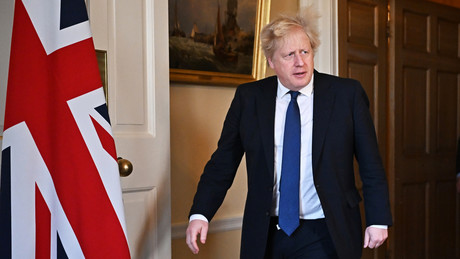 British Prime Minister Boris Johnson said during a trip to India that he did not understand how Kyiv could currently negotiate with Moscow. Vladimir Putin is like a crocodile chewing on Ukraine’s legs.

Russian President Vladimir Putin is like a crocodile chewing on Ukraine’s legs, British Prime Minister Boris Johnson told reporters on Thursday. “It’s hard to imagine how the Ukrainians can negotiate with Putin, given that he lacks goodwill and his apparent strategy is to conquer as much of Ukraine as possible, and then maybe from a position of strength negotiate out or even launch another attack on Kyiv,” Johnson said. He added:

How can you negotiate with a crocodile when it has your leg in its mouth? This is the difficulty Ukrainians face.

While he doesn’t understand how Putin can be a “valid interlocutor,” Johnson said that is something that Ukrainians must decide for themselves. Meanwhile, he assured that the UK and its NATO allies would continue to supply Kyiv with money and arms. The G7 leaders’ consensus on Ukraine is to “continue to provide the country with the things it needs to defend itself, primarily artillery.”

As Reuters reports, Johnson said Ukrainian President Vladimir Zelenskyy is confident in driving Russian troops out of the eastern Donbass region. However, Ukraine will probably not be able to recapture the Crimean Peninsula.

Johnson traveled to India on Thursday, where he wants to convince the country’s Prime Minister Narendra Modi to stop or at least reduce the purchase of raw materials and armaments from Russia. India has not yet imposed sanctions on Moscow.

More on the subject – Johnson: West can arm Ukraine after Russia withdraws