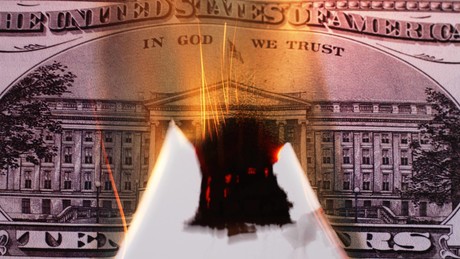 In a commentary, China’s official news agency accused the US of arbitrarily using its hegemonic position in the international financial system and dollar dominance as a weapon against other states. But that would ultimately lead to the collapse of this system.

The official Chinese news agency Xinhua has published a comment on the US sanctions policy, accusing Washington of “unlimited financial terrorism”. Even without firing a single shot or stationing soldiers in Ukraine, the United States has become a participant in the military conflict between Russia and Ukraine. With the US weaponizing its global financial hegemony, Washington’s financial terrorism is exacerbating the already highly charged confrontation and sending shockwaves around the world. Xinhua comments are considered to reflect official Chinese policy due to the news agency’s close ties to the ruling Communist Party.

Russia and the rest of the world are already feeling the effects of the US sanctions imposed in the wake of the Russian invasion of Ukraine, which have excluded many Russian banks from the international financial system SWIFT and confiscated significant Russian financial reserves. The sanctions have exacerbated the rise in oil and gas prices. The dramatic increases in some important goods have led to increased inflation in many countries and have plunged the already stagnating global economy further into crisis.

Against the background of this situation, Xinhua notes:

“It is very clear that the United States, taking advantage of the US dollar’s global dominance, is transforming the international financial system into an international sanctions system.”

Within the last 50 years, the United States had transformed “excessive privilege,” as French Finance Minister and later President Valéry Giscard d’Estaing put it in the mid-1960s, into an “excessive weapon of mass financial destruction” for use in geopolitical disputes .

The Chinese news agency points out that earlier this century Washington used similar measures against Iran that it is now using against Russia. The Iranian economy is still feeling the negative effects of these sanctions today. Xinhua warns:

“The recent sanctions and threats of further sanctions against Russia are another clear example of Washington’s increasingly unscrupulous use of its dollar hegemony for self-serving purposes. The world community should be more vigilant to Washington’s rampant financial terrorism.”

The US actions are a reminder to all states of the dangerous possibility of being decoupled from global financial markets depending on Washington’s current whim.

More and more governments positively evaluated the de-dollarization as a precautionary measure against the possible “financial terrorism” of Washington. It is no coincidence that the global decline of the US dollar as a reserve currency coincides with Washington’s increasingly frequent use of financial sanctions. Xinhua points out that in 2000 70 percent of all foreign exchange reserves were in dollars, while in 2021 it was less than 60 percent. In contrast, the importance of currencies of some emerging countries such as China’s renminbi is increasing.

“People with a basic understanding of economics know that the value of a currency rests on people’s trust in its issuer, usually a country’s government. The waning dominance of the dollar is a predictive indicator of the waning trust the world has in Washington. “

As in the skill game Jenga, the tower of dollar dominance is still standing, but some supporting blocks have already been removed. A full collapse may take some time, but ultimately appears inevitable given the “bad and destructive path” Washington is currently taking.