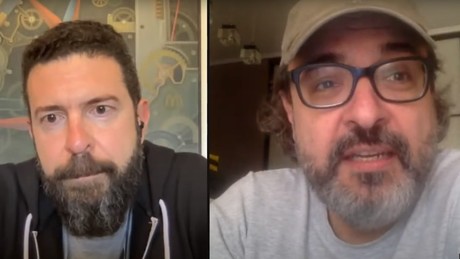 Ukraine-based Chilean author and Zelenskiy critic Gonzalo Lira’s days of silence have worried many who know him or appreciate his work. Now there is a sign of life from him in the form of a short interview statement.

Concern for Gonzalo Lira is experiencing a brief pause. After fears for days that the Chilean living in the Ukraine would have to endure serious problems, including the not unlikely possibility of his murder, relatives and sympathizers can breathe a sigh of relief for the first time. A few days ago, Lira had declared that if he didn’t get in touch for twelve hours, he would be counted among the disappeared. This statement is now defused by the interview for the time being.

The video is almost four minutes long, and the conversation leads the journalist Alex Christoforou, one of the makers of the channels The Duran. Lira looks very exhausted, but also relieved to finally be able to send a sign of life. Regarding his current status quo, he says at the beginning of the conversation:

He is physically fine and a bit upset after being arrested by the Ukrainian secret service SBU around noon on April 15. He thanked for the worldwide attention he had received to mention a second time that he was doing well physically. He did note, however, that far more attention should be paid to the people he connects to via his Twitter account @realGonzaloLira “highlighted”. Some of them have disappeared, if not killed. Lira does not mention any names.

He went on to say that he currently does not have his own mobile phone or computer. All publications after April 15, on his social media channels on YouTube, Twitter and Telegram, were not made by him because his passwords became known. All his access to old accounts are forbidden and not possible. That’s why he can only get in touch with people again through new addresses, as he did with Alex Christoforou.

The city’s “official website” expressly forbade him to leave Kharkov. So he will report back. At the end of the short statement he announced:

“I’ll have something smart to say.”