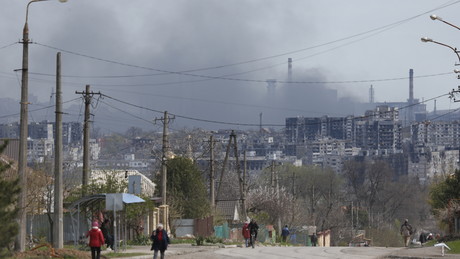 143,631 locals and 341 foreigners, as well as 1,844 soldiers of the Ukrainian Armed Forces were evacuated from Mariupol, Colonel-General Mikhail Mizintsev, head of the Coordinating Center for Humanitarian Aid of the Russian Federation, said on Friday.

Although the imposition of “rest periods” in Mariupol is slowing the advance of troops, since March 21, Russian forces have continued to announce daily humanitarian pauses to evacuate civilians in any direction and rescue civilians. This was stated on Friday by Colonel General Mikhail Mizintsev, head of the Interdepartmental Coordination Center for Humanitarian Aid of the Russian Federation and head of the National Center for Defense Management.

Every day from 10:00 Moscow time, the Russian army opens humanitarian corridors in the directions of Kharkov, Lugansk, Donetsk and Crimea to Russia. Russian, DPR and LVR military adhere to the “regime of silence” on all routes, including the ceasefires declared by the Ukrainian side. There is also readiness to open humanitarian corridors in all other directions as soon as possible.

The Ukrainian side, in turn, announced three corridors towards Zaporozhye, Krivoy Rog and Nikolayev, from where there are no corridors towards Russia. According to the Russian Defense Ministry, more than 143,000 civilians have been evacuated from Mariupol so far. Residents of Mariupol who wanted to leave for Ukraine were evacuated by the Russian military to the Zaporozhye region.

The chairman of the Russian investigative committee, Alexander Bastrykin, also initiated the establishment of a 24-hour hotline for refugees from the LVR and Ukraine on Friday. Assistance had previously been offered to citizens of the Donetsk and Luhansk People’s Republics and Ukraine. The Investigative Committee receives information from affected citizens about events related to criminal activities of the Ukrainian security forces, recognizes them as victims and offers them legal assistance. Refugees receive help in matters of social and housing situation, medical care, application for benefits and employment.
The hotline is designed to speed up the exchange of information, since the newcomers are housed in many regions of Russia. In this way, refugees should receive information about their rights and other issues. Findings gained about the crimes committed by the Ukrainian regime will be included in the ongoing investigations or will be evaluated separately from a legal perspective.

More on the subject – Report: Syrian volunteers ready to fight in Ukraine