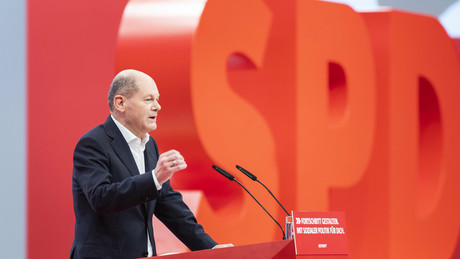 The SPD’s Russia policy has been the subject of heated debate since the start of the Russian military operation in Ukraine. Among other things, the Social Democrats are accused of being too close to the Kremlin and Vladimir Putin. Chancellor Scholz has now commented on the subject.

Chancellor Olaf Scholz has dismissed the allegations against the SPD because of its Russia policy over the past few decades as defamation. in one interview with the magazine Der Spiegel, the SPD politician complained that a “caricature of social democratic politics” was being drawn. So he said:

“The Social Democratic Party is a party that is firmly integrated into the transatlantic alliance and the West and does not have to accept the allegations that are being made.”

The SPD is accused of having placed too much emphasis on rapprochement with Russia in recent decades and neglected risks. Now Scholz says:

“These false and slanderous representations of the SPD’s European and Russian policies have existed since Adenauer’s time, and that annoys me.”

Above all, he defended the policies of the SPD chancellors Willy Brandt and Helmut Schmidt in the years 1969 to 1982. After the years when the Federal Republic of Germany was tied to the West under the CDU chancellor Konrad Adenauer, Brandt had a policy of détente with the states of Warsaw led by the Soviet Union Pact initiated, which led to the Eastern treaties with the Soviet Union, the GDR, Poland and Czechoslovakia. Scholz explains it like this:

“What distinguishes the SPD is Brandt and Schmidt’s clear policy of detente. A policy that made it possible for the Iron Curtain to disappear, for many countries in Eastern Europe to gain democracy and for us to be united in the European Union today.”

Scholz did not mention the third SPD chancellor, Gerhard Schröder, who established close relations with Russian President Vladimir Putin and pushed ahead with the further expansion of gas supplies from Russia.

However, he admitted that Germany had become too dependent on Russian gas. The problem is not “that there are two, three or four pipelines, but that they all come from Russia”. “We should have made sure early on that we could also be served by other suppliers within a very short time”.

Scholz also explained that Russia had not only “brutally” disregarded the principle of sovereignty of nations and the inviolability of borders with the invasion of Ukraine, but “already with the annexation of Crimea, with the staging of the uprising in the Donbass regions and in other parts of the world”. Accordingly, one should have reacted more harshly in 2014:

“We should have responded to the annexation of Crimea with some of the sanctions that we have now imposed. That would have worked.”

Scholz also emphasized that neither the former SPD Foreign Minister Frank-Walter Steinmeier nor the former Chancellor Angela Merkel from the ranks of the CDU should be held against “that they tried to create an order in Europe in which no country attacks the other”. . Rather, the SPD politician says:

“They did everything they could to prevent the war that we are unfortunately experiencing now. The fact that it failed is not due to Mrs. Merkel or Mr. Steinmeier, but to Putin’s imperialism, which takes pride in everything that is going on agreements and understandings that have been reached. Putin is the aggressor, nobody else.”