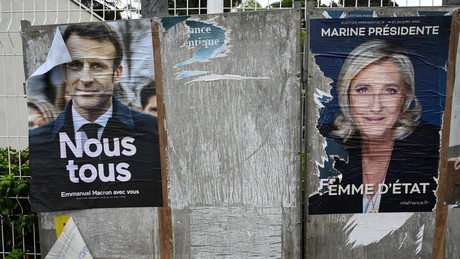 On Sunday in France, the second round of the French presidential election will take place as a runoff between incumbent Emmanuel Macron against Marine Le Pen. Now, a blunt, clear recommendation for one of the two candidates has come from leading politicians from Germany, Spain and Portugal.

The heads of government of Germany, Spain and Portugal have declared incumbent French President Emmanuel Macron their preferred candidate in the forthcoming second round of elections. At the same time, they warned French voters against supporting Marine Le Pen as leader of the Rassemblement National (RN, National Rally Movement).

On Thursday, three days before the run-off election in France and during the ongoing Russian offensive in Ukraine, German Chancellor Olaf Scholz, Spanish Prime Minister Pedro Sánchez and Portuguese Prime Minister António Costa surprisingly published a joint newspaper column in both the French Le Monde and the Spanish El País.

After first emphasizing in the introduction to the article that Russian President Vladimir Putin’s “aggression” is directed not only against Ukraine, but also against the values ​​​​that France and all European partners would defend, the authors of the article came to their main concern.

According to Scholz, Sánchez and Costa, “the populists and the extreme right” in their countries “made Vladimir Putin an ideological and political role model and took up his nationalist demands”. This must not be forgotten, no matter how hard these politicians “try to distance themselves from the Russian aggressor,” the leading politicians of three EU and NATO member states emphasized, possibly referring to Le Pen’s numerous denials and relativization of their possible sympathies for the Kremlin.

Therefore, according to the authors, the second round of the French elections is “not an election like the previous ones”, especially considering that “France is a central country in the European project”. The authors added verbatim:

“It’s a choice between a democratic candidate who believes France is stronger in a powerful and autonomous European Union (EU) and a far-right candidate who openly sides with those who are attacking our freedom and our democracy. ..”

Describing the alleged benefits of “greater European solidarity,” Scholz, Sánchez and Costa once again slammed pro-Brexit supporters, who they say have only created various problems for the UK leaving the European Union had.

Unity is the only way to maintain prosperity, to achieve “globalization in a humane way” and “to defend international peace and order,” the column continues.

“That’s why we need France on our side.”

In the further course of their guest contribution, Scholz, Sánchez and Costa specified that they needed a France that “welcomed the refugees who had fled the dictatorships of Franco and Salazar” and that “defended justice against anti-democratic leaders like Putin”. The leaders of the three EU member countries also addressed a question to French citizens:

“What France will emerge from the April 24 elections? The citizens of the French Republic have a choice.”

The article by Scholz, Sánchez and Costa also caused a stir in Russia. Maria Zakharova, the spokeswoman for the Russian foreign ministry, sarcastically called the politicians’ initiative “weekdays of democracy”. Zakharova wrote on the Telegram platform that she had two questions:

Some users also pointed this out on social media. A statement was also remembered as an expression of outrage by the then Chancellor Angela Merkel, with which she criticized alleged interference by Turkish President Recep Tayyip Erdoğan in the German election campaign in 2017.

Zakharova’s second question referred to an issue that Western countries have long been obsessed with. This is how she wrote:

“What about gender equality in elections? Is that no longer a factor? Or does gender not matter in developed democracies, where real power is not at stake, but real power?”

However, recent polls suggest that Macron does not need this open support from his European peers. A poll by the Opinion Way institute, conducted on Thursday with 1,334 participants, shows that 56 percent of voters are ready to support the incumbent president, while 44 percent would choose to vote for Le Pen.

In the first round of voting on April 10, Macron got 27.85 percent, while Le Pen was just a few percentage points behind with 23.15 percent.

More on the subject – Clash of worldviews: what characterizes the duel between Macron and Le Pen?