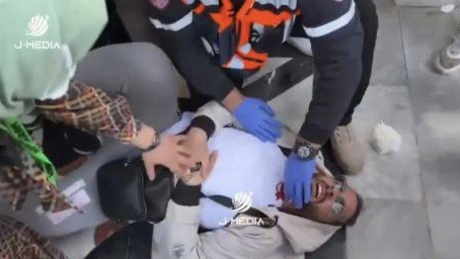 75 Palestinians were injured when Israeli security forces stormed the Al-Aqsa Mosque. Fourteen of them were taken to the hospital, three of them seriously injured. RT journalist Ali Yassin was also wounded in the neck by a rubber bullet.

Israeli security forces stormed the Al-Aqsa Mosque compound in Jerusalem on the morning of April 22. More than 75 Palestinians were injured, according to Palestinian doctors. The New Arab, citing the Palestinian Red Crescent, said 14 of the injured Palestinians had been hospitalized, three of whom were in very poor condition.

Witnesses reported that after morning prayers, police entered the area and used rubber bullets and stun grenades. It was an attempt to disperse a crowd of around 200 Palestinians, some of whom threw stones at the police. Police also fired rubber bullets at journalists documenting the clashes, witnesses said. RT Arabic cameraman and photographer Ali Jassin was also injured. A rubber bullet hit him in the neck and the wound had to be stitched up in the hospital.

For more than a week there have been daily clashes between Palestinians, Jewish nationalists and the police in the courtyard of the Al-Aqsa Mosque. Muslims attended the mosque very actively during the last ten days of Ramadan. The Israeli authorities had therefore promised that Jews would not be allowed to enter the mosque during this period. The Palestinians, however, accuse Israel of instead attacking Muslims practicing their faith and regularly allowing Jewish nationalists access to the mosque grounds.

More on the subject – Israeli flag march in Palestinian territories: “Death to the Arabs!”