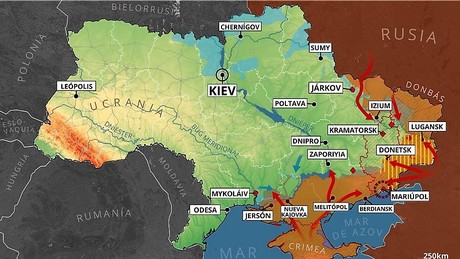 The Russian military has identified the targets for the second phase of the special operation in Ukraine. As previously announced several times, the primary goal is to achieve complete liberation of the Donbass republics in their former borders. In addition, there is now control over strategically important parts of Ukraine.

In the second phase of the special military operation, the Russian army plans to take complete control of Donbass and southern Ukraine, as well as create a land corridor to Crimea. This was stated by Deputy Commander of the Central Military District Rustam Minnekayev. He added that control of southern Ukraine would open access to Transnistria for Russian forces. There are cases of oppression of the Russian-speaking population there.

“Since the start of the second phase of the special operation, which started literally two days ago, one of the tasks of the Russian army has been to establish complete control over Donbass and southern Ukraine. This will create a land corridor to Crimea, which will also provide vital institutions of the Ukrainian economy,” Minnekayev said at the annual meeting of the Union of Defense Industries of the Sverdlovsk region on Friday.

The internationally unrecognized Transnistrian Moldovan Republic is a breakaway region in Moldova where Russian peacekeeping forces have been stationed since a civil war. Transnistria borders on the Odessa and Vinnitsa Oblasts in Ukraine to the east. Up to 200,000 Russian citizens live in Transnistria. The area has no access to the Black Sea and therefore no direct connection to Russia. Relations with Moldova’s pro-Western government have been strained for decades. Creating a land corridor to Transnistria would mean capturing the Black Sea territories of Nikolayev and Odessa in southern Ukraine.

Provisional civil-military administrations are being formed in many cities in southern Ukraine that are currently under Russian control. Access to Russian media will also be created and payment in rubles will be introduced. The military resistance of underground fighters against the Russian troops that Ukraine had hoped for has not materialized so far.

Above all, the situation in the southern Ukrainian region of Cherson north of Crimea, which is completely occupied by Russia, remains tense. Two prominent local politicians cooperating with Russia have been shot dead in recent weeks. Again and again there are attempts to disrupt the distribution of humanitarian aid to the civilian population. Russian reconnaissance officers repeatedly discover smaller, previously created weapons depots, suspected saboteurs are arrested.

On the other hand, the regional economic cooperation with Crimea, which was severed after the Kiev Maidan in 2014, is being restored and transport routes repaired. “Now essentially a unified economic complex has been restored, which existed for many years between the Kherson, Zaporozhye and Crimea oblasts,” Deputy Prime Minister of the Crimean government Georgy Muradov said in an interview with the TASS news agency on April 7.

“Then [nach dem Ende der militärischen Sonderoperation in der Ukraine] Of course, the question of the continuation and development of the closest economic, cultural, humanitarian and human cooperation with the Kherson and Zaporozhye regions will arise.”

The Permanent Representative of Crimea to Russian President Muradov also recalled that before the October Revolution, the Crimea, Kherson and Zaporozhye regions formed a single region: the Taurida province.

More on the subject – Crimean representative to the Russian President: In the south of Ukraine, the ruble will become the main currency