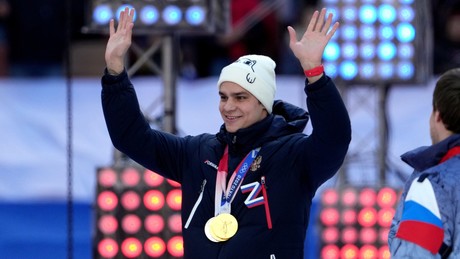 Russian swimmer Yevgeny Rylov is to be banned from performing for nine months for his support of Russia’s military operation in Ukraine. The chairman of the Duma Committee on Sport describes this as “Russophobia bordering on Nazism.”

On Friday, the International Swimming Federation (FINA) banned Russian swimmer and two-time Olympic champion Yevgeny Rylov from participating in competitions hosted by FINA for nine months. The decision was based on his support for the Russian military operation in Ukraine – or in other words, on his “presence and (his) behavior at the event at the Luzhniki Stadium in Moscow on March 18, 2022.” On March 22, swimwear manufacturer Speedo Rylow canceled its sponsorship for the same reason.

On March 18 in Moscow’s Luzhniki Stadium there was a mass rally with a concert to mark the 8th anniversary of Crimea’s unification with Russia. Rylov, 25, wore a jacket decorated with a Z symbol in the colors of the Russian flag for the occasion. Originally a marking of Russian military vehicles in Ukraine, this “Z” is now used or interpreted as a sign of support for the Russian military operation.

This decision by the swimming association caused sharp criticism in Russia. Rylov expressed his position as a citizen of Russia that the non-competition clause against him violated “all international rules,” said Dmitry Svischev, State Duma deputy and chairman of the Committee on Physical Culture and Sport. He explained:

“FINA has joined the list of politicized sports organizations that discriminate against Russian athletes without any reason. And such behavior towards Rylov for his opinion and for his Russian passport is Russophobia bordering on Nazism.”

The International Swimming Federation, which is responsible, among other things, for hosting the World Swimming Championships, had previously banned Russian and Belarusian athletes from participating in the World Championships in June 2022 in Budapest.

MP and ten-time world figure skating champion Irina Rodnina also had negative comments about FINA’s recent decision. The international sports federations tried to outdo each other in “loud announcements” and acted completely without rules, according to Rodnina.

Dmitry Peskov, the Russian President’s press secretary, linked Rylov’s ban from performing in a “pernicious line to the politicization of sport”. He highlighted:

“We believe that this is completely against the idea of ​​the sport.”

Peskov wished Russian athletes to keep in shape “to stay the best.” Rylow’s legal representatives have already confirmed that they are considering a legal challenge to the FINA decision.