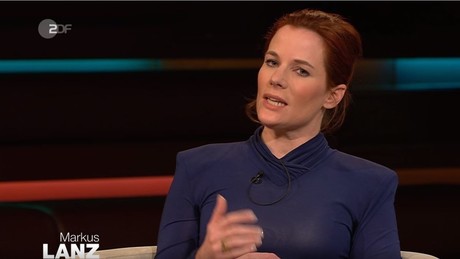 One thing is certain: Florence Gaub, who recently turned Russians into “non-Europeans,” is well paid for the nonsense she talks and writes. But what speaks out of it is exactly what one thinks in the network of EU and NATO. Not a slip, but an insight.

She attracted attention because of her racism, her remark to Markus Lanz that the Russians are not Europeans. And one might consider that a slip-up, or even a more narrow-minded studio guest leaving embarrassment. But Florence Gaub is something else entirely. Through her one can see deep into the mindset of NATO, because in reality this political scientist, touted as a “military expert,” is a paragon of the breed trying to ruin Europe.

After all, she worked for a few years at the NATO Defense College and is now Deputy Director of the European Union Institute for Security Studies. She has exactly the kind of training that military analyst Andrei Martianov is so passionate about makes fun (who himself graduated from the Soviet Naval Academy in Kursk) – a social science degree, a smooth elite career without any closer contact with the realities of life, and then she is: military expert. At least for the time.

To me, that’s by far the most racist #lance show I’ve ever seen. Well folks, don’t be fooled by the looks of the suffering Russians, they’re not like us. Great tip from @FlorenceGaub supported by Markus Lanz. pic.twitter.com/oXMc5PtPqH

In this capacity told them that Ukraine could win the war. And she immediately proves that she didn’t even do any proper research: “Not even half of the population in Donbass speaks Russian.” To find this rate, you have to be at least in Kyiv. This passage is also really nice: “Soviet thinking is widespread in the Russian armed forces. Even Stalin placed more emphasis on quantity than on quality. The training of Russian officers cannot be compared with the general staff courses in the West.” Martianov would roll on the floor laughing. Not only does Ms. Gaub evidently never have dealt with the Second World War more extensively, she has also not really researched the training courses of Russian (and previously Soviet) officers.

After all, she also mentions in this interview that one should occasionally look at the “other side”, i.e. the Russian side. But then says right away that there is so little in English. She seems unfamiliar with the use of electronic translation programs; with these you can even read Russian newspapers with relative ease, including the commentaries to get an idea of ​​what people are thinking.

As I said, she is touted as a military expert, but she does not even realize that the size of the Russian contingent is far below what might be expected for offensive action. This is very simple bean counting. Three attackers on one defender. It’s the first thing she should notice. But she is trapped in a bubble in which the Western military is fundamentally considered superior, and the Russians – well, as she put it in Lanz, they have a different relationship to death than the Europeans.

So wrote She does so in the Süddeutsche, which she also considers qualified: “Whether there are 1,500 soldiers in Ukraine – as Russia claims – or up to 15,000 – as NATO reports – Russia’s relationship to violence and death is not comparable to ours. In the two Chechen wars of the 1990s, for example, Russia probably lost up to 40,000 soldiers without there being any major protests among the population.Moscow will therefore not give in if it is in the red or has a lot of casualties, but if it understands that that it can’t win.” What she doesn’t understand, probably can’t understand, is that the Chechen war was an act of existential self-defense.

No, that is wrong. You don’t just have to understand it, you have to know it. After all, she is far too close to the heart of darkness, she has done research on Islamist terrorism and is also said to speak Arabic. The role that terrorism plays in NATO’s strategy cannot have escaped her notice. But of course NATO is the good thing, and the fact that Russia is in a position of defense against attacks by this alliance is a truth she would never speak. It would cost what is sure to be a considerable income.

As far as the war aims are concerned, she at least makes it clear what is at stake: “And it is also of interest to us that Russia fundamentally comes to the realization that not only can it not win this war, but that its future ambitions are also based on a new world order according to his ideas, because for Russia it is war in Ukraine Part of a larger and longer-term endeavor that will end with a reshaping of the world order around 2030.” No, not just for Russia. For the larger part of the world outside of the “West” that is hoping to end the period of being plundered and bombed at last Gaub states that NATO is concerned with subjugating Russia and, more importantly, with maintaining the current predatory order.

She wholeheartedly shares these goals. She spells out what Western politicians are currently doing, the real reason why even a complete defeat in Kiev might not make peace possible: “Anyone who ends the war quickly today will be putting a much bigger war on the future.” As I said, this is NATO speaking.

It is a delusional world in which she moves, and all evil is Russian. In January of this year, a Notebook of the EUISS entitled “What … if not”, in which she outlined a future vision for 2027. “A plane full of visa-free Afghan citizens had just landed in Orly, leaving them stranded at passport control. The flight had departed from Moscow, whose authorities said their papers were in order when they boarded the plane. ‘Another rotten Russian game’ , thought Marcel.”

This is geopolitics at the level of a Landser booklet, and it is very reminiscent of the angry propaganda against Belarus in the summer. Throughout the text, she promotes Muslim immigration to Europe (this will probably soon be over as a result of the sanctions), in the interest of the “labour market” (the wage squeeze), but wastes no thought on positive development prospects for the countries of origin. Hard material facts, whether military or economic, have no place in their world. More than that, she despises them, and even more those who move between them and are not part of her way stressed “post-heroic society”. “Millennials and Generation Z have other ambitions than waiting tables or standing on the production line.”

She probably means spreading nonsense for NATO and giving free rein to her own arrogance. But she picked the wrong time. It doesn’t matter whether you roll out the red carpet for her in German newspaper offices or let her spread her warmed-up story of subhumans on TV shows. They and their ilk, precisely through the battles they are fighting so successfully in the field of the media, are at most contributing to accelerating the decline of the West. Because the scales have already dropped, the world order is changing, and the future of their work lies in a display case labeled “Specimens of European Colonial Thinking”.