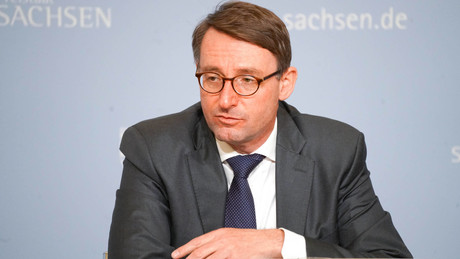 In the end it was one scandal too many. The pressure on Saxony’s Interior Minister Roland Wöller was too great. Prime Minister Michael Kretschmer pulled the ripcord. Wöller’s successor is to be Armin Schuster, the current head of the Federal Office for Civil Protection and Disaster Assistance.

The CDU politician Roland Wöller is dismissed as Minister of the Interior of Saxony. Prime Minister Michael Kretschmer (CDU) is drawing consequences from Wöller’s controversial personnel decisions and several scandals in the police force. Wöller has received his dismissal certificate and is expected to remain in office until Monday.

In the past few days, the pressure on the Saxon minister had increased significantly. Police unions withdrew their confidence from him and, even after crisis talks, renewed their calls for his resignation. Until the end, however, Wöller did not let on that he wanted to follow suit.

Saxony’s head of government justified the change at the top of the Ministry of the Interior with the need for a fresh start. Many things went well under department head Wöller, said Kretschmer on Friday in Dresden, citing, among other things, the police law and the increase in police jobs. Most recently, however, he had the feeling that “we are only talking about supposed or actual scandals”.

The 51-year-old was criticized for controversial personnel decisions, among other things. Most recently, it was about a post at the Saxon police academy in Rothenburg in the Görlitz district. Manja Hussner, for example, is to become the new chancellor there – a former fellow student of Wöller’s wife. He was then accused of nepotism. He rejected that. Positions are filled solely on the basis of selection processes based on suitability, performance and ability, he replied to his critics.

It was only this week that a new affair became known to the police. The Mobile Task Force (MEK) Dresden is said to have declared a skiing holiday in a four-star hotel in the Alps as a “training trip”. Wöller was “shocked but not surprised”.

The mobile task force in Leipzig made headlines at the beginning of April. According to the Dresden Public Prosecutor’s Office, 23 officers and a police doctor are in focus because of a forbidden admission ritual. In December 2020, on the instructions of a group leader, two new commando members were said to have been hit and injured by several shots from a police training weapon with colored cartridges in the Leipzig office.

The two incidents came in the course of the investigation into the so-called ammunition scandal of the MEK Dresden to light, which has been occupying Saxony’s authorities for around a year. According to this, special forces stole around 14,000 cartridges and used at least part of them as payment at a private shooting training course in Mecklenburg-Western Pomerania. The Attorney General’s Office has now filed charges against three police officers, and another 14 are still under investigation.

Another affair concerned allegations of corruption among the police in Leipzig. Officials there are said to have traded illegally with stolen bicycles. The case caused a stir under the keyword “bicycle gate”. In the meantime, charges have been brought against the former head of the evidence room.

Armin Schuster is to be Wöller’s successor. He is a CDU member and former head of the Federal Office for Civil Protection and Disaster Assistance (BBK). According to information from the dpa news agency, he should receive his certificate of appointment on Monday. Schuster originally comes from the Federal Police and brings with him experience as a head of authority. In 2009 he moved into the Bundestag for the CDU, but always got nothing when it came to the distribution of posts in the parliamentary group executive committee. The then Minister of the Interior, Horst Seehofer (CSU), appointed Schuster to head the BBK in November 2020.