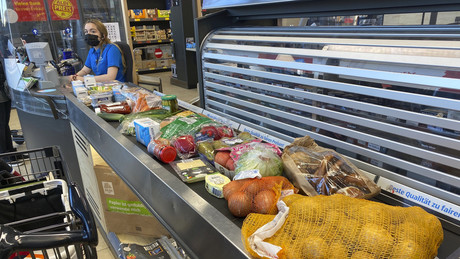 In view of the drastically increased cost of living, social organizations are calling on the federal government to make full use of a recent change in EU tax guidelines and effectively abolish VAT on staple foods.

The inflation rate is raging, the majority of people are already saving on what used to be everyday expenses. Many no longer even know how to pay for housing, food and, above all, heating. And the burden of higher consumer prices is increasing: According to a YouGov survey commissioned by Postbank, had
in January, 11 percent of people stated that they could hardly cover their living expenses; at the end of March, it was already 15.2 percent, i.e. about every seventh adult in Germany. Two-thirds of the 2,144 respondents said they had already reduced their spending due to rising prices.

The social associations as well as top economists are demanding more help for those people for whom the cost of living is rising too much. According to the president of the social association VdK, Verena Bentele, low earners, pensioners and people with basic security no longer know how to pay for groceries or the electricity bill.

At the beginning of April, Bentele emphasized that the government’s relief packages were not enough and warned that poverty in Germany would become increasingly entrenched. Bentele has previously criticized the fact that savings have been made “for the weakest in society” for many years and that planned special spending – especially with regard to the immense armament projects – should not be at the expense of social spending.

Together with other experts, she is now calling for a reduction in VAT on certain staple foods to “zero percent”. The federal government should take new EU legal options for this and set the tax rate to zero percent, demand not only the social association VdK, but also the consumer centers and the German Diabetes Society.

Two weeks ago is a change in the so-called EU Value Added Tax System Directive came into effect. It sets common requirements for VAT: the regular tax rate must be at least 15 percent, the reduced rate at least 5 percent. Complete tax exemptions are only possible in certain areas – since the change, this also applies to food and other goods to cover basic needs. In Germany, the standard rate is 19 percent. The reduced rate of 7 percent subsidizes products that, according to the definition, should serve the common good – including staple foods such as milk, meat or baked goods. The VdK therefore calls for the VAT on staple foods to be reduced to zero percent.

“The federal government must make full use of this opportunity, which is now available to all EU member states,” said Bentele.

Energy and also groceries have been becoming increasingly expensive for months. According to the Federal Statistical Office, food cost 6.2 percent more in March than a year earlier, and the prices for fresh vegetables rose by 14.8 percent. A reduction in VAT on certain staple foods could help people with low incomes in particular. Because they spend a larger part of their monthly income on food than people with high incomes, as the German Institute for Economic Research (DIW) explained. DIW President Marcel Fratzscher told the Augsburger Allgemeine:

“The federal government should temporarily abolish the reduced VAT rate of seven percent, as this would make food and other basic necessities cheaper and help people quickly and unbureaucratically.”

The political scientist and poverty researcher Christoph Butterwegge considers a general reduction in VAT to be ineffective, since the Corona crisis has shown that this is particularly important for large purchases – i.e. those that only people with an already high income or wealth can make – brought significant relief. In the Corona year 2020, VAT was temporarily reduced from 19 to 16 and the reduced rate from seven to five percent. According to Butterwegge, low-income households might have saved a few cents if the tax cut was passed on by retailers at all. “But people who bought an SUV or an expensive design kitchen had a real advantage. With such a purchase, the tax savings were sometimes several thousand euros,” explained Butterwegge in an interview with SWR.

The Federal Association of Consumers spoke out in favor of the complete abolition of VAT, especially for fruit, vegetables and legumes. This would cushion the effects of rising prices, which is currently important for low-income households, said food consultant Christiane Seidel. The managing director of the German Diabetes Society, Barbara Bitzer, also demands that the federal government must use the new legal leeway and abolish value added tax for vegetables and fruit. With regard to the health of consumers, she pointed to the possibility of offsetting the costs elsewhere by asking “the manufacturers of sugar-coated drinks” to pay.

“Sugar drinks are a major driver of obesity and diabetes.”

Manufacturers need effective incentives to reduce sugar content. That the former responsible minister Klöckner decreed voluntary does not work, various consumer advocates and organizations like food watch shown for a long time. In the United States, 100,000 people died from diabetes every year. An ever more widespread widespread disease, with annual costs of 293 billion euros most expensive disease has become, which primarily affects low-income households. Above all, however, a healthy diet should not be a question of money, Bitzer emphasized.