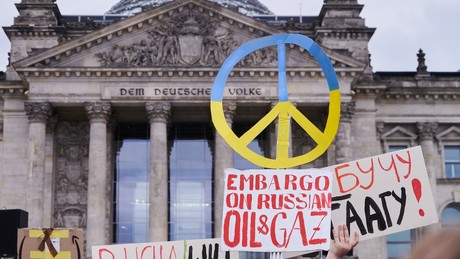 Billions and billions for the war, more and more weapons and more and more propaganda. What end can this lead to? But very few in politics and the media seem to be asking themselves this question. Instead, Russia is being rushed and rearmed. Anyone who asks about the causes of the war in Ukraine and its social development since the regime change in 2014 makes themselves suspicious, is discriminated against and is threatened with deprivation of livelihood. This is how it has been in the “land of poets and thinkers” for a number of years and has been exaggerated for a few months now.

Prime Minister Manuela Schwesig wanted to secure the gas supply for Germany and create jobs in Mecklenburg-Western Pomerania. That’s why she was elected by the people, and to that extent she did exactly what she was supposed to do. That they are now part of warmongering against Russia hostile corresponds to the guidelines that politicians with an affinity for the US receive and implement from the hegemon in Washington.

There are grotesque events that take place. So spoke the CDU foreign policy expert Norbert Röttgen of “relations with Moscow” and suggested that Schwesig resign. And the chairman of the Europe Committee in the Bundestag, Anton Hofreiter (Bündnis 90/Die Grünen), demanded that Schwesig should now advocate an oil embargo and the delivery of heavy weapons to Ukraine. Other SPD politicians have also been polemicized for allegedly overly cooperative behavior towards Russia, including former Vice Chancellor and Federal Foreign Minister Sigmar Gabriel. As if it were an offense to have diplomatic relations with other governments or to have contacts with business partners.

The agitation became absurd when Federal President Frank-Walter Steinmeier was accused by agitators of the war of being too close to Russia. That’s why Steinmeier, who wanted to travel to Ukraine “out of solidarity,” is undesirable there, sources in Kyiv said. And the Ukrainian ambassador Andrei Melnyk, who has been acting as a cheerleader for months spoke of “mental proximity” to Putin and a “spider web” of contacts with Russia. He auctioned even to the claim: “For Steinmeier, the relationship with Russia was and remains something fundamental, even sacred, no matter what happens. Aggressive wars don’t play a major role either.” At the latest since Steinmeier’s visit to Montenegro in September 2016, it has been proven that Steinmeier is a NATO propagandist of the purest kind.

Agitators and puppets of American imperial policy have the say and determine German security policy. Suspicions about alleged atrocities by Russian soldiers are used as an opportunity to call for ever tougher sanctions against Russia and the delivery of heavy weapons to Ukraine, without considering the consequences. After repeated repetitions, a suspicion is presented as a fact, even if Russia denies it. It has now been proven that the war crimes in Bucha and other Ukrainian cities were committed by Russian soldiers, although according to the Russian account they only happened after their troops had withdrawn. There are crimes in the course of the war that must be solved before a verdict can be reached.

Former NATO military analyst and author Jacques Baud writes rightly so, it is about understanding what led to the war. He notes that “the ‘experts’ who take turns on television analyze the situation on the basis of dubious information”, mostly starting from hypotheses, “which are transformed into facts, so that we no longer manage to understand what is happening “. That’s how you create panic.

German society is becoming more and more chaotic and de-democratized. The poverty of the already poor sections of the population and of parts of the middle class is increasing at an alarming rate. Individual sectors of the economy are on the brink of ruin. If the cheap demands of the Ukraine, Poland and the Baltic states that Germany should forego gas and oil from Russia are diligently accepted by German politicians, this shows absolute disregard for the interests of their own people. It is a breach of the oath of office that these “people’s representatives” have sworn to serve the well-being of the German people and avert harm to them.

First publication on the reflection pages.

The writer and publicist Dr. legal Wolfgang Bittner lives in Goettingen. He published “The Conquest of Europe by the USA” in 2014, “The Homeland, the War and the Golden West” and “The New West-East Conflict” in 2019 and “Germany – Betrayed and Sold. Backgrounds and Analysis” in 2021.