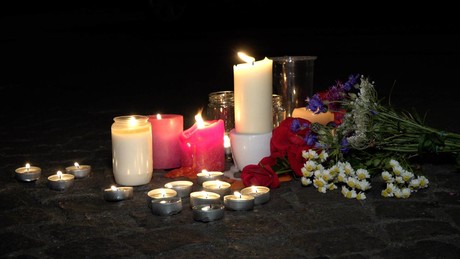 Almost 30 days of negotiations and 13 joint plaintiffs: the trial of the knife attack on unsuspecting people in Würzburg began on Friday. The public prosecutor assumes that the perpetrator was not responsible for the attack and wants a permanent placement in a psychiatric ward.

The trial of the deadly knife attack on several people in Würzburg began on Friday. The regional court negotiated until late summer. Almost 30 days of trial are scheduled, there are 13 joint plaintiffs. The perpetrator is a man from Somalia who attacked numerous people with a knife in the late afternoon of June 25, 2021 in downtown Würzburg. Three women aged 24, 49 and 82 were killed and nine others injured. Six of them heavy. The youngest victim was an 11-year-old girl who suffered serious injuries in the attack.

The Attorney General accuses the man of three counts of murder and attempted murder on eleven counts. According to eyewitness accounts, he first grabbed a kitchen knife with a blade length of around 30 centimeters from the window of the Woolworth department store chain and then started attacking people indiscriminately. Most of his victims were women.

The Munich public prosecutor’s office assumes that the fugitive was not guilty of the attack. Therefore, there is no indictment in this case, but a so-called application for a security procedure. At the end of the day, the Somali could be placed in a psychiatric ward. The chief public prosecutor’s office suspects hatred of Germany as a motive due to treatment that is perceived as unfair.

During the attack, he is said to have shouted “Allahu Akbar” (“God is Great”) at least twice. As reported by Bayerischer Rundfunk, conclude the investigators, however, from an Islamist motive.

The man’s perpetration is considered proven. The presumed 33-year-old – his date of birth is not known for certain – came to Germany in 2015 as a refugee, apparently without a passport. Since then he has been noticed several times because of mental problems. According to their own statements, the authorities had no indication that the man could endanger other people up to the day of the crime. According to experts, the Somali is said to be paranoid schizophrenic.

At the start of the process, the man initially only commented on his date of birth. Accordingly, he was born in 1989. When asked by the presiding judge what day that was, the 33-year-old said with the help of a translator: “I think I remember my mother saying, in December.”

According to his defense attorney, the alleged 33-year-old apologized for his actions and expressed his sympathy. “He regrets the suffering he caused, especially to the victims and their families,” said lawyer Hans-Jochen Schrepfer on Friday at the start of the trial before the Würzburg district court.

More on the subject – Knife stabber from Würzburg: Psychiatry instead of prison