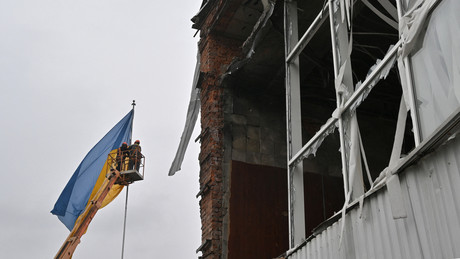 According to the Ukrainian authorities, up to 30 percent of the country’s infrastructure has been damaged as a result of the Russian military operation. Kyiv wants to obtain access to frozen Russian state funds for reconstruction, as the Minister of Justice announced.

According to Ukrainian Justice Minister Denys Maljuska, Kyiv is working with international lawyers on a procedure to use frozen Russian state funds to finance the country’s reconstruction. Maljuska told Reuters news agency:

“We chose the most important target – the money of the Central Bank and the Welfare Fund of the Russian Federation.”

Referring to the Russian state, he added: “You are in one place, you have an owner and that owner is clearly engaged in illegal, criminal activities.” He has a significant amount of money.

According to Ukrainian authorities, up to 30 percent of infrastructure has been damaged as a result of the Russian military operation since February 24. The pure material damage should add up to almost 500 billion dollars. Malyuska referred to an analysis of the data published by the Central Bank of Russia. Accordingly, the targeted funds also add up to about this amount. The Minister of Justice emphasized:

“We know where to look for it.”

Part of the sum is said to be in the USA, the rest in Great Britain and various EU countries.

On Thursday, Ukrainian President Vladimir Zelensky said in a video link during a meeting of the International Monetary Fund (IMF) and the World Bank in Washington that the country would need “hundreds of billions of dollars for reconstruction”.

According to a report by the AFP news agency, IMF boss Kristalina Georgieva campaigned for aid for the country “as far as possible” in the form of grants and not in the form of loans. According to this, it should be prevented that Kyiv accumulates considerable debts. Therefore, according to Georgieva, the support should not be granted as a loan.