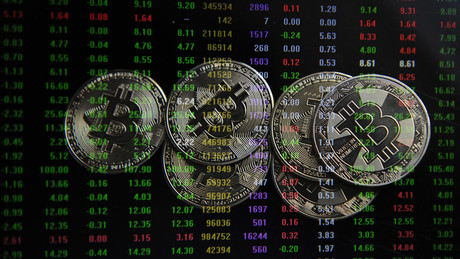 As a global financial crisis unfolds, many eyes linger on bitcoin. Amidst the rapidly rising inflation, more and more people are wondering whether the “digital gold” can be an effective solution for them too against expropriation, devaluation, digital surveillance and loss of capital. Large companies, but also more and more countries like Russia, have long since approved the concept.

In the short term, experts expect that Bitcoin will initially continue to lose value. On Easter Monday, the cryptocurrency was rotating at around €36,000 ($38,900) per unit. With the year-to-date high of €44,385 ($47,900) on March 28, these are the usual fluctuations in value that have been seen a lot in recent years. A major, historic, uninterrupted uptrend is unmistakably ongoing. The medium to long-term forecasts for Bitcoin remain unchanged: further appreciation in the course of the coming global financial system upheavals, which will be defined by enormous wealth transfers.

A quick reminder for all those who have only just tuned in: cryptocurrencies are digital currencies that serve as a modern means of exchange. In essence, cryptocurrencies are decentralized digital money intended for use over the internet. The underlying cryptography is used to secure and verify transactions and control currency unit expansion.

In contrast to the centralized fiat money, which can be multiplied at will by an ominous financial top (which is usually fired up by the state bureaucracy subservient to it), cryptocurrencies are based on a decentralized, digital cash book. This is managed by a network of computers and cannot be manipulated or corrupted by any central authority.

The latter is one of the main reasons why Bitcoin and meanwhile many other of its successors (such as Ethereum or Cardano) have become so attractive among investors, traders, savers, investors and now also for the Russian state.

Under pressure from sanctions: Russia open to crypto innovation

With irritating sanctions designed to isolate and destroy Russia financially and economically, news of the possible green light from the Kremlin to legalize cryptocurrency payments soon didn’t come as much of a surprise.

When the Russian Kommersant this information last Friday announced — referring to a supposedly authentic, recent bill from the Russian Ministry of Finance — the crypto community on Twitter was so smitten that many took it as a done deal. It’s not that far yet, but in view of the developments in the world economy and Russia’s changing position in it, it probably won’t be long.

Come in addition the message about the letter of recommendation from the head of the Russian Chamber of Commerce and Industry (CCI), Sergey Katyrin, to the Russian Prime Minister Mikhail Mishustin. In it, he proposes offering cryptocurrency payments and payments in their own national currency to countries on the African continent.

At the end of March, the Russian State Duma was still discussing the possibility of approving natural gas and oil payments from “friendly countries” in Bitcoin. More precisely, it was even the chairman of the Energy Committee in the Russian Parliament, Pavel Zavalny, who made this proposal. Zavalny has also been the President of the Russian Gas Company since 2013.

So there is much to suggest that the Russian leadership is employing a fundamentally multi-pronged financial strategy to deal with the problems created by the sanctions.

If it works, then right

Like the Financial Times recently, many German expert opinions and studies summarized, the implementation of a full EU energy embargo on Russia will result in a “drastic recession” for Berlin and Brussels. It was said that 400,000 jobs would be lost and economic growth would drop by 2.2 percentage points for the next year. The traffic light government under Chancellor Scholz is still resisting this embargo, since everyone knows how dependent the German economy is on Russian energy sources.

For most, it is difficult to get involved with new types of financial instruments. The habit of having every individual financial transaction approved and guaranteed by the state and provided with a seal of approval became too insistent. Objectively speaking, however, it is the western state itself that is letting its citizens down financially. “Shower less” isn’t the same advice as “buy some bitcoin with your 2016/17 Christmas bonus.” (Even today, buying Bitcoin would be worth it in the long run.)

Skepticism about the modern state is a phenomenon that has grown rapidly in recent years. The rapidly increasing incompetence in economic and financial policy is now even apparent to laypeople. That the EU bureaucracy will end up accepting the impoverishment of much of its population is plain to see for those who care to see. Today even more than ever before. The current sanctions policy of the EU against Russia is only the very latest and most obvious step from Brussels. Many other reckless people preceded him, especially in the last two years of the corona crisis. The economic-political hara-kiri that the EU is deliberately pursuing serves, if not to dissolve the confederation of states, then at least to destroy its middle classes.

As we did at the end of January reported, the reasons for the coming financial collapse have been apparent for several years and cannot even be traced back linearly to the special military operation in Ukraine initiated by Vladimir Putin at the end of February. However, the western states are happy that the decades of their parasitic, careless, and expansive monetary policy can now be tied to an external scapegoat. Understandably, those who embrace this lie will be the very ones who will suffer the most from future financial systemic upheavals. That will be the punishment for never having dealt critically enough with one’s own Brussels and Washington monetary system.

And the ever-growing minority who want to preserve their remaining financial sovereignty somehow have to prepare themselves for a dangerous slalom – consisting of state control and regulations – in order to avoid expropriation within the EU.

More on the subject – Because of sanctions against Russia: is a Bitcoin ban imminent?