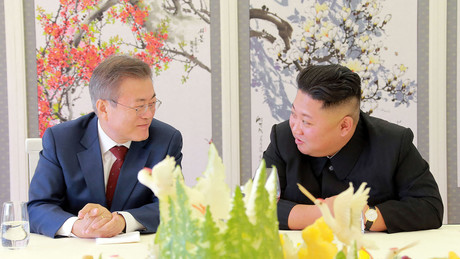 Incumbent President of South Korea Moon Jae-in wrote a letter to North Korean leader Kim Jong-un. The next day, he received a well-intentioned reply, in which Kim Jong-un wished relations between the north and the south of the country to improve.

Moon will hand over office next month to conservative President-elect Yoon Suk-yeol, who has already announced a tougher stance on North Korea. The state-run Korean Central News Agency (KCNA) of the North Korean KVDR said on Friday in Pyongyang:

“Kim Jong-un recognized the toil and effort Moon Jae-in made for the great cause of the nation up to the last days of his tenure.”

The North Korean leader hailed the “historic joint declarations that give the whole nation hope for the future” that he and Moon signed. KCNA reported:

“The exchange of personal letters between the top politicians of the North and the South is an expression of their deep trust.”

Moon has had several meetings with Kim. In 2018, he became the first South Korean president to visit Pyongyang in more than a decade and the first head of state from Seoul to address the North Korean public. He also helped arrange the historic meetings between Kim and then-US President Donald Trump in 2018 and 2019.

Moon’s office confirmed the exchange of “friend letters” with North Korea. “The era of confrontation should be overcome through dialogue,” said the outgoing President in his farewell message.

The exchange of letters came amid a period of heightened tensions on the Korean Peninsula, as Pyongyang had conducted multiple missile tests in recent months. In March, North Korea announced that it had successfully launched its largest ICBM, the Hwasong-17, capable of reaching the United States.