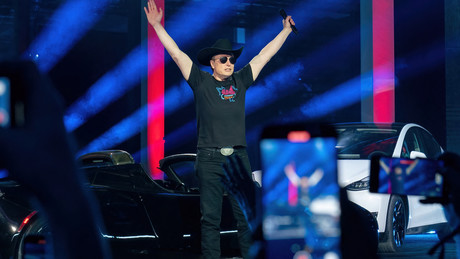 US entrepreneur and richest person in the world, Elon Musk, says he has pledged more than $46.5 billion to buy Twitter and is now trying to negotiate an agreement to acquire the communications platform. His earlier attempt had failed.

A filing with the SEC Thursday said Musk was reviewing a so-called tender offer to buy all of the social media platform’s common stock for $54.20 a share in cash. He is considering making a formal offer to all shareholders for the online service’s outstanding shares.

Musk has commitments for loans of over $25 billion and also wants to bring in shares worth around $21 billion. In a takeover bid, Musk would make his offer directly to the other shareholders, bypassing the board.

Musk announced last week that he intends to buy and delist Twitter. He named a price of 54.20 dollars per share, which would correspond to a total value of around 43 billion dollars (currently around 39.5 billion euros). Twitter’s board of directors then launched a defensive measure, allowing other shareholders to buy shares at lower prices as soon as a buyer like Musk exceeds the 15 percent mark. That would dilute his stake.

At the same time, Twitter is keeping the option open of agreeing to a deal if the price is right. The documents, filed with the Securities and Exchange Commission, say San Francisco-based Twitter Inc. has not responded to Musk’s proposal. Twitter said in a statement Thursday that it had received Musk’s updated proposal and his “new information about potential funding.” The company stated that its board of directors “will conduct a careful, comprehensive, and considered review to determine what course of action it believes is best in the interests of the company and all Twitter shareholders.” Last week, Twitter’s board of directors took actions that would make a takeover attempt by Musk unaffordable.

Musk had bought a good 9 percent stake in the company in the past few months and emphasized the platform’s potential for freedom of expression. The entrepreneur then said that Twitter did not do justice to this, with which he justified the intention to acquire the short message service.

The criticism of Twitter is all the more ironic because the US billionaire himself is known not only to express the free opinion of employment lawyers in their companies covered with partly dubious methods, but also free reporting at social controversial Projects such as the giga factory in Grünheide near Berlin, which was largely erected without permits, were obviously limited.

Musk put a stop to the development of public interest in Germany, even at events involving the chancellor and economics minister: media representatives who had traveled to the event had to stay outside. Musk has questions from the radio about the alarmingly high water consumption of his factory in a region where residents have to reduce their consumption, according to the waterworks publicly mocked. Not only in Gruenheide and the USA the US billionaire turned himself in applicable rules and standards.

Twitter itself has long reserved the right to selectively block tweets and users – even at the request of individual countries. RT was and is affected in a number of ways.

With an estimated net worth of nearly $279 billion, Musk is by far the richest person in the world. However, most of his money is in Tesla shares and his space company SpaceX, so he would also have to use credit to buy Twitter. Funding would come from Morgan Stanley and other financial institutions. Other banks involved are Barclays, Bank of America, Société Générale, BNP Paribas and the Japanese institutes Mizuho Bank and MUFG. Morgan Stanley is one of Twitter’s largest shareholders after the Vanguard Group and Musk.

Musk stated that $13 billion in funding came from Morgan Stanley and the other banks. $12.5 billion is in loans backed by his Tesla shares and $21 billion is provided in equity “directly or indirectly” by him, though he didn’t say where those funds came from. The filing states that the equity commitment could be reduced by contributions from others or by raising additional debt.

In a takeover bid, Musk would try to get other shareholders to sell him their shares at a specific price and date. If enough shareholders approve, Musk could use it as leverage to get the board to approve his deal. However, even after the financing commitments were announced, investors doubt that Musk will reach his goal. After the financing was announced, Twitter shares fell slightly to $46.57 on Thursday afternoon. The share price is $7.63 below Musk’s offer.