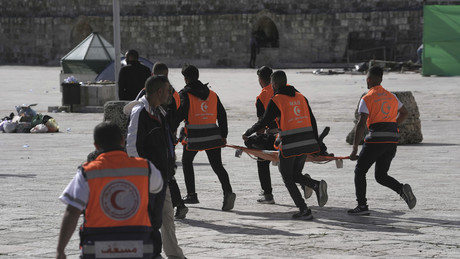 Dozens of Palestinian worshipers were injured at the compound of al-Aqsa Mosque in occupied Jerusalem on Friday after heavily armed Israeli forces stormed al-Aqsa Mosque during the third Friday of Holy Ramadan.

The Israeli police justified the operation as a reaction to stone-throwing by young Palestinians. According to other sources, Israeli forces stormed the Al-Aqsa Mosque compound in the occupied Old City as worshipers gathered there for morning prayers.

According to the Palestinian news agency WAFA and Press TV, the “Israeli raid” on the holy site occurred early on Friday and joins almost daily attacks since April 15 in which Israeli police used brutal force against Muslim worshipers. The goal was therefore to clear the holy site so that Israeli radicals could celebrate Passover there.

Known as the al-Aqsa Mosque to Muslims and the Temple Mount to Jews, the holy site lies at the heart of the Israeli-Palestinian conflict. Clashes there often led to violence elsewhere.

According to the Jordan-led Islamic Waqf Authority, which oversees the site, about 150,000 worshipers, most of them Palestinians from Jerusalem, the West Bank and Arab cities within Israel, turned out to worship at al-Aqsa Mosque today despite the tension pray. Except for Ramadan, male Palestinians living in the occupied West Bank are only allowed to enter the city with a hard-to-obtain military permit.

Several Palestinians and neighboring Jordan are accusing Israel of violating long-standing agreements by allowing growing numbers of Jews to visit the site under police escort. The long-standing ban on Jews worshiping at the site has been eroded in recent years, raising fears among Palestinians that Israel may want to take over or partition the site.

The Israeli government has declared that it adheres to the status quo and blamed Hamas for the violence. In contrast, radical Israeli nationalists themselves had insisted on visiting the site and shouted slogans inciting violence on the spot.

According to media reports, dozens of worshipers were injured when Israeli occupying forces fired tear gas canisters in the courtyards of the mosque shortly after Friday prayers. Accordingly, Israeli drones indiscriminately fired tear gas at believers, including children and women. Many had to be treated by local paramedics at the scene due to respiratory problems.

In March, a senior Hamas official, in an interview with a Lebanese broadcaster, warned that any confrontation with Israel to defend the al-Aqsa Mosque and other Islamic sites in Jerusalem would be “a game changer” that would send Israel “opening the gates of hell.” would open, as reported by the Iranian news agency Tasnim. The group’s activities in May last year, when an 11-day war broke out between Hamas and Israel, were just a “prelude” to a longer “fight” the organization was preparing for.

This year, Ramadan coincided with the week-long Jewish Passover and Christian Easter. The Old City is in East Jerusalem, which Israel conquered along with the West Bank and Gaza Strip in the 1967 Middle East War. Israel annexed East Jerusalem in an internationally unrecognized action and considers the entire city its capital. The Palestinians aspire to an independent state in all three territories and regard East Jerusalem as their capital.

The UN special rapporteur on the human rights situation in the Palestinian territories occupied since 1967, Michael Lynk, called on the international community to take urgent steps to counter the escalation of Israeli violence in occupied Palestine. For example, according to UN Security Council Resolution 1860, Israel should end the 15-year-old blockade of the Gaza Strip. Israel must also immediately stop all human rights violations and abuses in the occupied Palestinian territories, including the disproportionate use of force, demolitions and forced evictions.

“In recent weeks, violence related to the 55-year Israeli occupation of Palestine has increased,” Lynk said in a statement. “International inaction in the face of this new level of violence will only encourage more,” Lynk said on Friday.

According to the report, the stubborn Israeli occupation can no longer be distinguished from apartheid, and more than 40 Palestinians and 15 Israeli and foreign nationals have already been killed by the violence this year.

“Violence and massive violations of human rights are pre-programmed in such an unequal relationship. History teaches us the bitter lesson that long-lasting and unwanted foreign rule is always enforced with violence and fought with violence,” warned the special rapporteur.