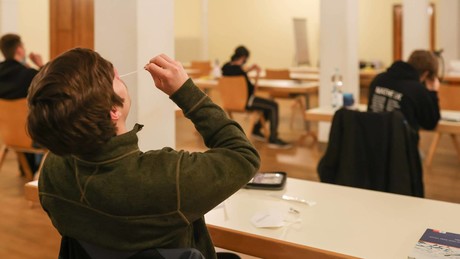 The time of mandatory corona mass tests for children in schools is apparently coming to an end – for now. Most federal states abolish the obligation to test. Critics had described the tests as “harmful and disproportionate”.

After the mask requirement has been lifted, the time for mandatory corona tests in schools is now coming to an end. As a survey by the news agency in the 16 federal states showed, the obligation to test has already been abolished in six countries or ends at the beginning of the new week, in six countries it expires at the end of the week at the latest at the turn of the month.

However, testing will continue in Berlin and Thuringia: in Thuringia until May 6th and in Berlin “until further notice”, according to the education administration. Hamburg and Saarland have not yet made any decisions about how to deal with tests from May.

Educational unions and the German Teachers’ Association criticized the extensive end of compulsory testing. Parents’ initiatives had long described the mandatory mass tests in schools as “harmful and disproportionate”.

Tests are obviously still plentiful. According to earlier information from the Berlin Senator for Education Astrid-Sabine Busse (SPD), the state of Berlin still has millions of tests in reserve and could “easily come by the summer holidays”.

More on the subject – “Harmful and disproportionate”: Bavarian parents are fighting against mass tests in schools