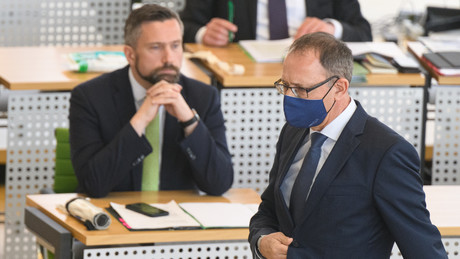 What happens next with compulsory vaccination in nursing? That was the question asked by the Saxon AfD parliamentary group in Dresden on Monday. However, a motion to abolish the controversial encroachment on physical integrity was rejected by all other parties in the Saxon state parliament.

The parliamentary group of the AfD in Saxony on Monday according to the MDR called for a special meeting to abolish the obligation to vaccinate in the healthcare and nursing sectors.

The party wanted with the application “vaccination for all! Top priority for health!” put pressure on the state government to lobby the Bundesrat for a corresponding change in the Infection Protection Act. AfD parliamentary group leader Jörg Urban said that one’s own body should never “become available to politicians and governments” and in this context also referred to the blatant shortage of nursing staff. From his point of view, this would get worse with the compulsory vaccination. He means:

“Patients will now find it even more difficult to find a doctor. They will have to put up with even longer waiting times for surgeries.”

The other parties accused the AfD of superfluous staging and unanimously rejected the application. The AfD would fuel sentiment against corona vaccinations. The health policy spokeswoman for the Greens, Kathleen Kuhfuss, said:

Other MPs criticized the AfD for saying that the vaccination hardly brought any health benefits. Specifically, he meant the socio-political spokesman for the CDU, Alexander Dierks:

The left parliamentary group leader Rico Gebhardt said that the AfD application was nothing more than “support for opponents of vaccination”.

The compulsory vaccination in care was introduced nationwide in mid-March. By the end of the reporting period, around 18,000 cases of unvaccinated employees were registered in Saxony, which is suffering from an acute shortage of specialist staff anyway. Your continued employment is currently being reviewed by the authorities. However, the facilities have so far been able to continue to employ their employees if health care is called into question without them.

Minister of Health Petra Köpping (SPD) reminded on Monday in the context of the AfD application of the 15,159 people, most of whom were well over 80 years old, who died in two years of a corona situation with or from Covid in the Free State of Bavaria, which has four million inhabitants. On the other hand, she did not comment on people who suffer from “vaccination side effects” or who have even died as a result of the vaccination.

More on the subject – “Conservative assumptions”: Ministry of Health buys even more vaccine for 2.6 billion euros