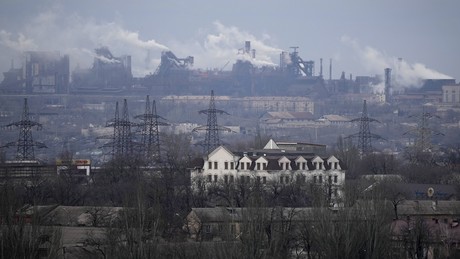 The Russian Defense Ministry announced on Monday that it would end hostilities near the Azov-Stahl steelworks in the port city of Mariupol from 2 p.m. Moscow time and open a humanitarian corridor for civilians.

The ministry announced on Monday that the Russian military and the armed forces of the Donetsk People’s Republic will cease fighting near the Azov-Stahl steel plant from 2 p.m. Moscow time (1 p.m. Central European Time) so that civilians can be evacuated to safety. Mikhail Mizintsev, head of the Russian Defense Management Center, said that armed units withdraw to a safe distance and ensure the withdrawal of civilians in any direction they choose.

The ministry said it intends to broadcast this proposal to the Ukrainian military over radio channels every 30 minutes. The Ukrainian side must confirm their readiness “to start the humanitarian operation” by hoisting white flags around the steelworks.

According to the agency, there are no obstacles to the withdrawal of civilians from the steel mill. The only hindrance may be the decision of the Kiev authorities and the commanders of nationalist units to continue using civilians as shields.

According to Russian sources, 2,500 Ukrainian fighters and foreign mercenaries are holed up in the plant. According to Ukrainian information, there are also 1,000 civilians in the bunkers, including many children and women. Attempts to set up escape corridors have so far failed.

More on the subject – “When does an escape corridor open?” Azov regiment presents civilians in the bunker of “Azov-Steel”