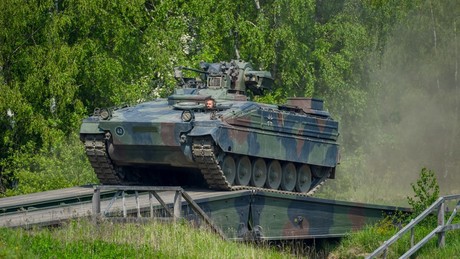 Germany cannot deliver Swiss ammunition to Ukraine because of a veto from Bern. This has been confirmed by the Swiss State Secretariat for Economic Affairs (SECO), according to a report in the Swiss “SonntagsZeitung”. It is said to be ammunition for Marder armored personnel carriers.

The Swiss Confederation is said to have thwarted German plans to export Swiss-origin ammunition from Germany to Ukraine, local Swiss media reported on Sunday, citing the Federal State Secretariat for Economic Affairs (SECO). The Alpine country is said to have referred to its neutral status and the relevant legislation, which prohibits arms deliveries to conflict zones.

The fact that the Düsseldorf-based armaments group and vehicle supplier Rheinmetall, which builds Marder-type armored personnel carriers for the Bundeswehr, uses Swiss-made ammunition for these, has apparently proved to be a stumbling block for Berlin’s recent plans to deliver the appropriate ammunition to Kyiv.

SECO had received two requests from Germany to pass on ammunition previously delivered from Switzerland to Ukraine, the federal authority confirmed to the Sunday newspaper on Sunday. Both requests “were rejected with reference to Swiss neutrality and the restrictive rejection criteria of the military goods legislation,” the Swiss authorities continued.

Swiss law requires Bern to agree to any arms re-export to third countries and specifically prohibits arms shipments to conflict zones. While Switzerland joined anti-Russian sanctions, a rare departure from its strict policy of neutrality after Moscow launched its military operation in Ukraine, it remained neutral when it came to military aid to Ukraine.

“Only ‘right and sensible’ weapons”

According to media reports, the Swiss veto against the re-export of ammunition from Germany has caused considerable irritation in this country because it allegedly made it impossible to deliver Marder armored personnel carriers to Ukraine. However, the federal government had never officially confirmed such plans. The German government had been repeatedly criticized by other NATO members, notably Poland, for allegedly not doing enough to help Ukraine. The topic has now also led to tensions within the “traffic light” coalition.

Earlier in April, Chancellor Olaf Scholz declared that Germany would only send “proper and reasonable” weapons to Kyiv, adding that there were no plans to send “offensive” weapons such as tanks, which Ukraine had repeatedly asked for. For her part, Foreign Minister Annalena Baerbock called on the West to supply Kyiv with heavy weapons and appeared to criticize Scholz directly, emphasizing that “now is not the time for excuses”.

Initially, Berlin supplied Ukraine with 1,000 anti-tank weapons and 500 Stinger anti-aircraft missiles. In mid-March, the German government announced that it would not release any further information about arms deliveries to Ukraine due to security risks. Then, in mid-April, Germany announced it would allocate an additional $2.1 billion for military spending, most of which will go to support Ukraine.

On Saturday, however, a group of well-known German politicians and public figures, including former members of the Bundestag and a former assistant secretary-general of the UN, called on the federal government in an open letter to end military aid to Ukraine and instead work towards Kyiv dropping its military resistance in the name of peace and dialogue.

More on the subject – Heavy weapons for Ukraine? The next act of German delirium