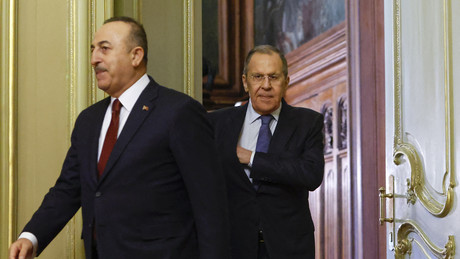 Turkey closes its airspace to Russian flights to Syria after blocking the Bosphorus to all foreign warships. With the new measure, Ankara is making it more difficult for Moscow to supply its troops in Syria.

Turkey has closed its airspace to Russian military and civilian planes that are moving soldiers from Russia to Syria. This was announced by Turkish Foreign Minister Mevlut Çavuşoğlu on Sunday. Previously there had been talks with the Kremlin. Ankara gave Moscow permission to fly through Turkish airspace every three months until April, but those flights have now been halted, Çavuşoğlu said.

The Turkish foreign minister reiterated that the airspace closure should in no way be understood as an affront. He had already announced the measure to his Russian counterpart Sergei Lavrov in March, who informed Russian President Vladimir Putin in good time. Putin then ordered that the Syria flights be stopped from the agreed date in April. Overflight rights must be renewed quarterly. Çavuşoğlu added that the ban will remain in effect for three months.

So far, there has been no immediate response from Russia to Turkey’s announcement. Along with Tehran, Moscow has been a key supporter of the Syrian government since the outbreak of the Syrian conflict, which was fueled from outside.

Çavuşoğlu compared the new move to the closure of Turkish waterways to foreign warships based on international treaties. The Turkish government recently downplayed the closure of the Bosphorus as a purely administrative act. However, this measure, which Ankara had taken at the beginning of the war on the basis of the Treaty of Montreux, effectively prevents the Russian naval formations in the Black Sea from being strengthened. At the same time, however, the Turkish foreign minister emphasized that Turkey had also made a planned NATO maneuver in the Black Sea through the Bosporus impossible at the beginning of the war. They did not want to “provoke” the Kremlin with the passage of western warships.

With the new measure, Ankara is making it more difficult for Moscow to supply its troops stationed in Syria and the air force and naval bases there. It remains unclear whether the air routes via Iran or Iraq are sufficient to supply Russian troops in the Levant.

If the situation in Ukraine continues to deteriorate, Syria’s President Bashar al-Assad in particular will lean more heavily on Iran, and this would improve the Iranian leadership’s chances of further expanding its influence in Syria. Russia is said to be reducing its armed forces in Syria in order to further strengthen its presence in Ukraine. The Russian soldiers withdrawing from Syria are now being replaced by Iranians or pro-Iranian militias. The new Iranian operation has reportedly already been requested by the Syrian President with the approval of Russia.