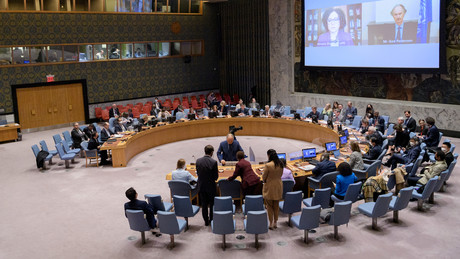 A senior Chinese diplomat urged the world community to step up efforts to deal with the situation in Syria. The Chinese envoy also repeated Beijing’s call for western countries to lift their sanctions.

China’s Deputy Ambassador to the UN Dai Bing called on the international community to step up efforts on Syria’s economic, humanitarian and security situation during a session of the UN Security Council on Tuesday, China’s official Xinhua News Agency reported. Citing the seventh meeting of the core group of the Syrian Constitutional Committee, the Chinese diplomat said Beijing urges all parties in Syria to keep in touch with UN Special Envoy for Syria Geir Pedersen. The parties involved should also intensify consultations on certain documents and promote the political process led by Syrians.

“China stands ready to work with the United Nations, the Guarantee States of the Astana Process and relevant countries in the region to make greater efforts to resolve the above two outstanding issues.”

The economic and humanitarian situation in Syria is grim. It is the responsibility of the international community to help the Syrian people overcome the difficulties and move forward with reconstruction, Dai said.

The international community must seriously implement Security Council Resolution 2585 by providing unconditional humanitarian and reconstruction assistance to the Syrian people and helping them to obtain sustainable basic services. The Chinese diplomat explained:

“We appreciate the Syrian government’s active cooperation in this operation and call on the relevant parties in the North West to ensure access and security for the cross-border operation to facilitate the distribution of aid.”

The Chinese diplomat again called on the US and other Western countries to lift their unilateral coercive measures against Syria in order to give the Syrian people their rights to develop the economy, engage in trade and rebuild the country.

More on the subject – Are Russia and Israel heading for a direct confrontation in Syria?