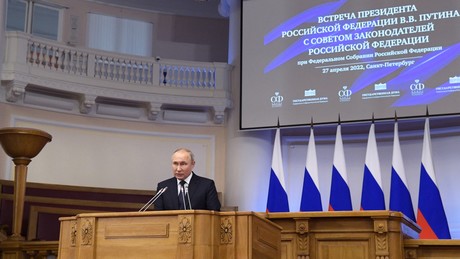 In a speech on Wednesday, Vladimir Putin justifies Russia’s policy and warns third countries against interfering in the Ukraine conflict. Russia has resources that no one else has and if there is a strategic threat, the response will be “lightning quick”.

On Wednesday, Russian President Vladimir Putin addressed members of the Legislative Council on the occasion of Russian Parliamentarism Day. Among other things, he repeatedly justified the Russian military operation in Ukraine with the need to prevent an attack on Russia. Without the actions of the Russian armed forces, a “massive conflict” on Russian territory would have unfolded according to “alien scenarios”, according to Putin.

Without naming specific names, the Russian President referred to forces that historically have repeatedly tried to portray Russia as a danger and to destabilize it because of its very existence. This has recently become clear in the attempt to instrumentalize Ukraine into an “anti-Russia”. In this regard, Putin warned against external interference in the military operation in Ukraine:

“I underline that if anyone intends to interfere in ongoing events and create strategic threats unacceptable to Russia, he must know that our counterattacks will be lightning fast.”

The country has “all the means” for such reactions, including those that no one else has, Putin added. Russia will “not brag” about it, but will use it if necessary. He explained:

“And I want everyone to know that we’ve made all the decisions about that.”

On April 20, Russia tested a state-of-the-art RS-28 Sarmat ICBM. The guided missile can cover a distance of 18,000 kilometers at 15 times the speed of sound and is said to be able to bypass all existing air defense systems. The US and its NATO allies currently have no supersonic missiles in their arsenal.

In the ongoing Ukraine conflict, NATO is actively supporting Ukraine with arms supplies, including anti-tank and anti-aircraft missiles, armored vehicles and artillery. Numerous sanctions have been imposed on the Russian economy. This prompted Russian Foreign Minister Sergei Lavrov to comment on April 26 that NATO was waging a proxy war against Russia.

However, Washington has so far ruled out the deployment of NATO ground troops or the establishment of a no-fly zone over Ukraine.

More on the subject – Lavrov: Nuclear war is unacceptable, but the danger is real