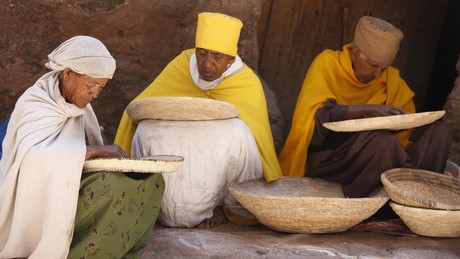 The war in Ukraine has global repercussions, but Africa is particularly affected due to its high dependency on food imports from Eastern Europe. The African Development Bank is trying to counteract this.

African Development Bank (AfDB) President Akinwumi Adesina said on Tuesday that grain prices in Africa had risen by 60 percent due to the disruption to exports in the wake of the Ukraine war, Turkey’s official Anadolu News Agency reported. As a result, the continent could afford $11 billion less in grain, Adesina said. In the Nigerian capital, Abuja, he stated:

“The price of wheat is already up about 60 percent. Corn and other grains will also be affected. There could be a fertilizer crisis as there would be a deficit of about 2 million tons. And that will increase food production by about 20 percent percent.”

During a meeting with Nigerian President Muhammadu Buhari, the AfDB President said that the war had created global problems but that they were particularly acute in Africa. The continent imports a very large proportion of its food from Russia and Ukraine.

According to economic experts, although the war in Ukraine is a major shock to the world market, countries could learn from it how to avoid becoming heavily dependent on wheat imports in the future.

Since the outbreak of war in Ukraine on February 24, the supply chains have been interrupted, resulting in an enormous increase in the price of food.

In addition to wheat, world market prices for sunflower oil and crude oil have also skyrocketed.

The Maghreb countries are also dependent on Russian and Ukrainian wheat, with imports from both countries accounting for more than 50 percent of their needs, according to official figures.

The AfDB plans to help farmers in Africa grow wheat, corn, sorghum and soybeans to avert a food crisis on the African continent and mitigate the impact of the Russia-Ukraine conflict, Adesina said.

The bank has developed a $1.5 billion food emergency plan for Africa, which has yet to be approved by the bank’s top management.