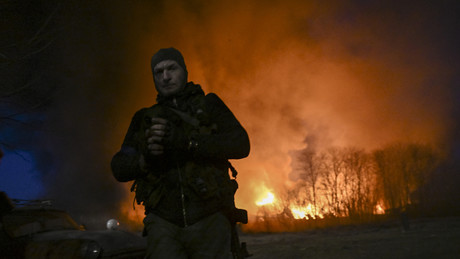 China has announced the US’s goals in the Ukraine war. According to the Chinese Foreign Ministry, the US continues to pour fuel on the fire, while the international community calls for an end to the hostilities.

The US is not interested in peace in Ukraine, but will do everything to ensure that the conflict in the country lasts as long as possible. Chinese Foreign Ministry spokesman Zhao Lijian said this at a briefing on Friday. Zhao was referring to ongoing financial aid and arms shipments from Washington to Kyiv:

“As the international community calls for an end to hostilities, the US continues to add fuel to the fire and show its willingness to fight to the last Ukrainian.”

The real goal is not to create peace, but to ensure that the conflict drags on, it said:

“As they say themselves, they want to weaken Russia. As for the question of whether the US will bring peace or war, security or chaos – I suppose we all know the answers to these questions.”

China also voiced its support for Russia, defying the US and others who are demanding Beijing condemn Moscow for the war in Ukraine. Foreign Ministry spokesman Zhao Lijian verbatim:

“An important lesson to be learned from the success of Sino-Russian relations is that both sides have moved beyond the Cold War-era model of military and political alliance.”

Zhao Lijian added that they are committed to developing a new model of international relations. Part of this model is not provoking confrontation or targeting other nations, Zhao said. The spokesman for China’s Foreign Ministry stressed that this is different from the “Cold War mentality”.

Earlier this week, US Secretary of Defense Lloyd Austin acknowledged that by helping Kyiv, Washington intends to “weaken Russia to the point where she can’t do the kind of things she did when she invaded Ukraine.”

On Thursday, US President Joe Biden asked Congress for an additional $33 billion to help Ukraine in its ongoing conflict with Russia. On the same day, US lawmakers voted in favor of a lend-lease program for Kyiv. If President Joe Biden agrees, Washington would find it easier to ship arms to Ukraine, but the country would ultimately have to pay for those shipments. Moscow has already warned that this could plunge Ukraine into a debt trap that will burden the country for generations to come.