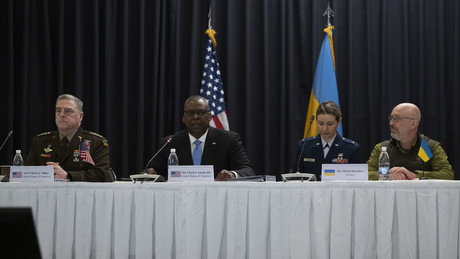 US President Joe Biden announced a week ago that he would arrange for another large arms shipment to Kyiv worth US$ 800 million. Although he held out the prospect of requesting even more military support from the US Congress.

For all the panache emanating from Western reporting on all the massive and voluminous arms shipments to Ukraine, one obvious question is barely explored: do the freshly-delivered arms even reach their legally designated “end users” – the Ukrainian armed forces?

Now, US intelligence sources have recently been fairly transparent about US news channel CNN admittedthat there is an extreme number of unreported war equipment that has gone missing, which is intercepted on a flourishing black market, rededicated and then resold.

As for the whereabouts and use of the new weapons after they crossed the border into Ukraine, the intelligence source explains:

“We have high reliability for a short period of time, but when it enters the fog of war, we have almost nothing left. […] It falls into a big black hole and after a short time you have almost no idea about it at all.”

The further explanations of the US representation point to the rationale that the alternative of a lack of or no armament of the Ukraine represents a higher risk than the gross loss of all the previous war equipment that is currently in use is registered and accepted.

There is also a gap between the optimistic and reassuring public statements made by the Ukrainian government and President Zelensky and what the US leadership already suspects behind the scenes. Washington understands this, because they can understand how important public perception is in times of war:

This is not the first time that the chilling admissions of possible misuse of arms sales have been made. The logistical, organizational and – yes, as a result also – the ethical problems of international arms deliveries are discussed relatively regularly in expert publications.

The private Washington-based US research institute for international relations The Stimson Center has a general expert conclusion in a February 2021 report published:

“Conventional weapons diversion is a key international security issue because unregulated weapons[verbreitung] Perpetuate and exacerbate conflicts and armed violence, facilitate serious violations of human rights and international humanitarian law […] and can contribute to insecurity and instability. A large proportion of the diversions are related to the international transfer of such weapons.”

The arms transfers to Ukraine are just that: international. This means they are extremely vulnerable – almost tailor-made – to being abused.

A January 2021 Small Arms Survey (SAS) report cited case histories from the previous year, including a rocket launcher found in a dumpster in the northwestern Ukrainian city of Zhitomir. Zhitomir is a historical as well as current hub for Eastern European transport and logistics routes. The route connects major cities, such as Kyiv, with both Warsaw and Minsk.

So what has been going on in Ukraine since the start of the special military operation would now have to be multiplied by an even larger factor.

As, among others, from the Ukrainian Telegram channel “Legitimny” reported, here’s a regional example that came to light a few days ago:

Looters are on the rise in Ukraine.

“In Irpin, near Kyiv, two looters – spotted by two women – blew them up with an RGD-5 grenade.

When asked by counter-terrorism ‘Where did you get the grenade from?’ came the laconic reply: ‘From the roadblock.’

The problem of the uncontrolled proliferation of weapons.”

The RGD-5 grenade is a weapon developed and approved in the Soviet Union in 1954 that is still in use and circulated around the world today. It was initially used throughout the “Eastern Bloc”, just as it is still used today in Ukraine (also by the National Guard, which was founded in 2014, and the National Police, which was founded in 2015 – both report to the Ukrainian Ministry of the Interior).

There is a US variant called the M67 that was developed a little later. At the beginning of March 2022, 7,500 of these were shipped from Canada to Ukraine delivered.

The well over twenty countries that have so far supplied Ukraine with arms worth billions of dollars must be aware that a large proportion of these products never reach their official recipients at all. It is too lucrative to tap into and obfuscate these supply chains in order to generate more “untaxed” sales and profits.

Even if someone is still willing to believe in the fairy tale of a finally “free”, “independent” and “democratic” Ukraine – since the fall of the government in Kiev in 2014, which violated international law – one should not use the Global Organized Crime Index (in German: ” Global Organized Crime Index”) underestimate. According to this, it says about today’s Ukraine:

“With a sizeable arms arsenal, few barriers to accessing arms, and millions of small arms and light weapons on the black market, Ukraine is considered one of the largest arms smuggling markets in Europe. The country has long been an important link in the global arms trade, but since the beginning of the conflict in eastern Ukraine [2014] has strengthened its role. […] Within Ukraine, the cities of Odessa, Dnipro, Kharkiv and Kyiv are important logistical centers for criminal networks.”

The possible consequences for Europe

According to the UN, there are already 870,000 Ukrainian returnees with the enormous movement of refugees from Ukraine, which is now characterized by a great deal of back and forth been registered (As of April 14, 2022).

This also means that even more dynamism and “elasticity” can be foreseen in the illegal transport of goods, including weapons. Opacity and a lack of customs work within the EU and throughout Europe will also put internal security policy to a historic test. The unholy alliance of people smuggling and arms smuggling should be a matter of serious concern. The Global Organized Crime Index should also be quoted at this point:

“Ukraine is a source, transit and destination country for human trafficking, which is extremely widespread in this country. According to reports, Ukraine is one of the largest source countries of people subjected to forced labor in Europe. This problem has increased due to economic hardship and increased political unrest. […] Ukraine remains both a transit and origin country in the transnational human smuggling market. It is a transit country along the migratory route from Southeast Asia and the Middle East en route to EU countries.”

“Modern slavery” is a word that Western communities of values ​​hate to hear, especially in a context that suggests they are partly to blame for this heinous phenomenon. Many do not suspect that human trafficking can very well be combined with illegal arms transport. In this way, the responsible arms dealers achieve a considerable reduction in their own risk.

An article published by the European Eye on Radicalization platform highlights the high probability of a “repeat Afghanistan” in Ukraine explained. Islamist radicalization, which only gained momentum when Soviet troops withdrew from Afghanistan in 1988-1989, grew into an international problem: all the military-trained extremists came from all over the world, gathered in Afghanistan, and then dispersed again at various trouble spots and in conflict zones worldwide. Today, the ultra-right neo-Nazi radicalization of the Ukrainian extremists is at a similar historic peak, having been allowed to thrive on Western blessings and capital for decades, and particularly the past eight years. Very similar to the intense and lavish support the Islamists received from the US at the end of the Cold War to break up their hegemonic Soviet counterpart. Even then, weapons and military equipment simply “disappeared” en masse. As the lifetime achievements of politicians such as Zbigniew Brzeziński, Henry Kissinger and Hillary R. Clinton (a little later) illustrate all too clearly, that was the goal back then and is it up todayto win the “Big Game” against Moscow in the battle for Asia.

The original topic – namely the extremely ominous concealment and dispersal of international arms deliveries – must now be put over all that was mentioned in the last section once again: what happens when these weapons start to fall into the wrong hands at a systemic level? History, which is not too far away, already has the answers ready for us. A metastasis called “Modern Armed Terrorism with Ease”. One that the US and NATO military-industrial complex consciously feeds and feeds.

More on the subject – The Ukraine war and the EU: guns, more guns