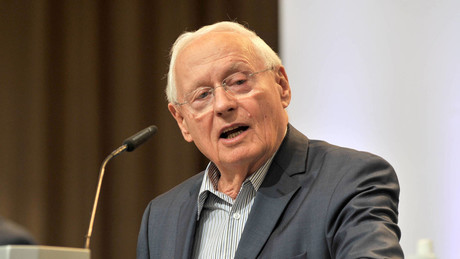 In an article in the Swiss Weltwoche, former left-wing politician Oskar Lafontaine explains that a negotiated peace with Moscow – against US resistance – is becoming increasingly urgent. Otherwise the danger of a nuclear war would increase.

Oskar Lafontaine, former top politician, most recently of the Left Party, with which he is now closed recently spoke in the Swiss World Week on the Ukraine war: in his contribution “America is pushing Europe into nuclear war” he points out right at the beginning that the Ukraine war is in fact a proxy war between the USA and Russia. According to Stratfor founder George Friedman, the main goal of the USA has been to prevent cooperation between Germany and Russia for centuries, from which one can also see today what the goal of NATO’s eastward expansion was:

“You can also understand why, years ago, US Deputy Secretary of State Victoria Nuland freely admitted that the US had spent five billion dollars installing a puppet government in Kyiv that it wanted.”

It is therefore plausible when experts warn that the US strategy is tantamount to a long war in Ukraine, according to Lafontaine. However, it is astonishing that one does not want to see this in Germany. It is also problematic that there are few politicians with foreign policy experience in the current government. The SPD is currently missing detente politicians like Willy Brandt or Egon Bahr, and not much can be expected from the FDP either. However, the “most dangerous US vassals” today are the Greens:

“People thought it couldn’t get any worse, but the new Secretary of State, Annalena Baerbock, uses fascist language and wants to ‘ruin’ Russia. She claims to be standing on the shoulders of the recently deceased Madeleine Albright, who caused the deaths of 500,000 Iraqi children by US sanctions. Imagine the clamor of the Greens if Russian Foreign Minister Lavrov justified the deaths of 500,000 Ukrainian children on whatever grounds.”

In this situation, it is not enough if Chancellor Olaf Scholz (SPD) delays arms deliveries. Increasing arms deliveries are part of the Biden administration’s policy, which wants to weaken Russia at all costs and has no regard for the deaths that result. Members of the Bundestag who are demanding arms deliveries will also be partly responsible for the increasing number of victims, Lafontaine warns:

“How long is the war supposed to last? As long as the war in Afghanistan? Why don’t German politicians learn from the failures of the US-led wars of intervention, in which the Bundeswehr participated?”

The only hope now is that French President Macron and Scholz will seek a negotiated solution based on Ukraine’s neutrality and autonomy for the Donbass. However, the Ukrainian president is not a reliable negotiating partner because he is repeatedly put under pressure “by the USA and the right-wing extremists in Ukraine”.

In a historical review, Lafontaine goes on to explain that former French President Charles de Gaulle, for example, recognized that in the conflicts between the USA, Russia and China, Europe must avoid at all costs itself being drawn into a nuclear escalation by the great powers. Similarly, Willy Brandt also knew that a policy of peace and detente could only be implemented against resistance in the USA, which was reflected in his Ostpolitik.

“The United States was very angry, as evidenced by a phone call by Henry Kissinger to Richard Nixon, in which Kissinger openly wished Willy Brandt cancer on his neck.”

In the meantime, however, an “adventurous discussion” is being held in Germany in which an attempt is made to present the current situation as a result of the attempt at good cooperation with Russia:

“Seldom has the truth been turned upside down. Never before has it become so clear to what extent US propaganda determines the media and the political debate in Germany.”

Unless he succeeds in reaching a negotiated peace soon, the danger of a nuclear war will increase, “because those responsible in Moscow have their backs to the wall and the gamblers in Washington have believed for years that a nuclear war could be limited to Europe.”

More on the subject – Because of a dispute over the stance on the Ukraine war: The Left wants to dismiss the Council of Elders