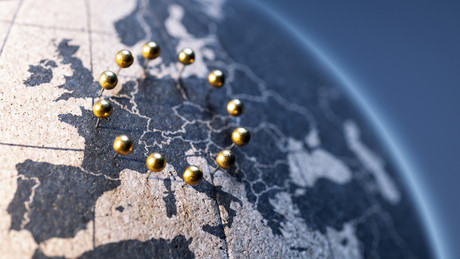 While Finland and Sweden are being dragged into NATO by a rope and infected with the Russophobia virus in order to trim them down to the right format, Serbia is consistently demonstrating an inappropriate policy. Despite the pressure, Serb support for EU membership is currently at an all-time low.

An analysis by Andrei Rudalev

While Finland and Sweden are being dragged into NATO by a rope and infected with the Russophobia virus in order to trim them down to the right format, Serbia is consistently demonstrating an inappropriate policy. Despite the enormous pressure on this country from “civilized” humanity, Serbs’ support for even the idea of ​​joining the EU is currently at an all-time low.

According to an Ipsos poll, only 34 percent of Serbs polled would support possible EU membership, but around 44 percent would vote against it. The Ukraine crisis is cited as the reason for this current Serbian Euroscepticism, but also the massive pressure to force Belgrade into the sanctions front against Russia.

One has to understand that the country’s rulers are trying to maintain a balance: Belgrade has a clear “European” course, after all its geographic location alone obliges it to do so. But at the same time, they are distancing themselves from the policy of sanctions against Russia, thereby breaking with established norms.

Interior Minister Aleksandar Vulin summed up these norms when he stated that the European Union “measures the country’s love for Europe by its hatred of Russia.” This is a kind of political disjunction principle “either – or”. Incidentally, this has already been fully applied to Ukraine, which is known to have contributed to the current catastrophe. Ukraine was required to sever all historical, cultural, business and human ties with Russia. And that became a real explosive device for the country.

By the way, the same Vulin expressed the main political principle of Serbia: to be not only a military, but also a politically neutral country. Why shouldn’t that be a role model for the current Scandinavian candidates for NATO membership?

Serbian President Aleksandar Vučić called this position “crucial” to what matters most, namely Serbian interests, rather than the instantaneous fulfillment of every will of a global chain of command. Such a position does not allow going to extremes and pursuing a policy based not on “counter-principles” and confrontation, but on cooperation. In fact, it was precisely this thought that marked the beginning of building a “common European home” with the principle of prioritizing precisely such cooperation. In reality, the EU has become just a political appendage of NATO.

Oddly enough, by the way, Soviet Secretary General Mikhail Gorbachev warned against such a scenario of the development of events when he wrote back in the late 1980s that the myth about the legendary kidnapping of Europa suddenly “got a modern tone.” In his view, the impression had already arisen at that time that any independent policies of Western European states had been “carried across the ocean” and that they were being forced to sacrifice national interests under the pretext of security needs.

At the same time, Gorbachev also spoke about the responsibility of all of Europe in a situation where the world was at a crossroads and the Old World could have been a worthy example of new thinking based on principles of good neighborliness, trust and cooperation. But as we know, one took a wrong turn at this crossroads. Europe failed to show its own will and take an independent position. When the common “European house” was built, the same states, out of sheer habit, kicked the door open with their feet, sat down at the end of the table and began to dictate. First they cheered Europe up with the bombing of Yugoslavia, and then they tightened the noose around their necks with the Ukrainian disaster.

How to rate that? Perhaps Serbia alone has remained true to those principles of integration that originally gave hope for a European Union.

Apparently, this Balkan country’s current Euroscepticism is related not only to contemporary factors and not only to its own tragic experiences of 1999, but also to elementary common sense. Because the EU in its current form is not only absurd and disadvantageous for any country that wants to pursue sovereign politics, it is simply dangerous as a whole.

This structure was once a beautiful utopia that has now turned into a dystopia. When disintegration processes prevailed in the territory of the former Soviet Union, the unification processes in Europe formed a counterbalance. However, the opportunity for historical integration was lost. And now Europe is more of a symbol of disintegration and isolation.

Incidentally, at that time in Russia this utopia even took on the form of a dream of an even greater prospect for Europe – from Lisbon to Vladivostok. An oligarch once ran for the presidency with similar ideas. But in order to realize this idea, people then pretended to be craftsmen, wanted to carry out repairs here and there in the “European style” and above all introduce standards … To be precise, Russia actually had hopes in connection with this house for a long time – not necessarily as a stateroom in itself, but at least as an extension in the same architectural style.

But then the hastily assembled European patchwork quilt soon began to crack and fall apart. It was established that greater effectiveness was only possible through central administration, and anyone who didn’t want such a construct of subordination just got kicked out – like England. Who knows, maybe Brexit was even the only lifeboat that could be lowered from the European Titanic?

In reality, it turned out that the political superstructure of the EU only facilitates the bondage of bailouts, filling the dorm with the spirit of blood. NATO is one thing, and Europe united in this way is just another level of subordination, as the bombing of Yugoslavia showed.

In the current format, the EU is also dangerous due to the loss of all reason, when only those who shout the loudest are right. And today that clamor comes mostly from the young European revanchists: from Poland and the Baltic Trinity, who wanted to gain advantages by conjuring up a Russian threat. There, the old specter of National Socialism is increasingly taking on a form of flesh and blood again.

After the EU countries have actually become the architects of the Ukrainian catastrophe, one can forget any benefits of membership. Unless, of course, you want to share the common guilt and rush into the abyss together with everyone else in the wagon.

In addition, the main political currency that can now be exchanged is misanthropy towards Russia. This is a sine qua non of the current format of this “European integration” to which the EU has degenerated, a caricature of itself.

Serbia, with its common sense, stands apart from this current boom. It is sticking to the very course that was laid at the beginning as the foundation of European integration. This alone contains the hope for a future of this community, for its new assembly. Because the format that this “old world” has now taken on leaves the EU no chance.

Translated from the Russian

Andrei Rudalev is a Russian publicist, writer and literary critic