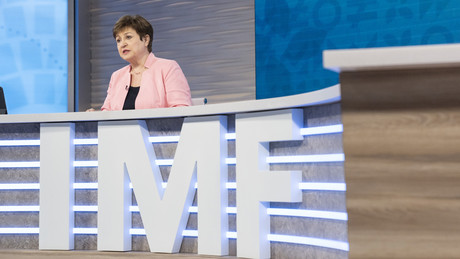 Since August 2019, Lebanon has been shaken by a severe financial crisis. A large part of the population is now affected by poverty. The Lebanese government is hoping for help from the IMF. But in return this demands reforms.

International Monetary Fund (IMF) Managing Director Kristalina Georgieva has said her organization stands ready to help Lebanon overcome its severe financial and economic crisis, official Chinese news agency Xinhua reported. Georgieva emphasized the need, from the point of view of the IMF, to implement structural reforms in a timely manner. As the Lebanese Council of Ministers said in a statement on Sunday, the IMF director said:

“The timely implementation of the agreed reforms is crucial to secure much-needed funding from the international community.”

The Bulgarian economist expressed this warning during her meeting with Lebanese Deputy Prime Minister Saadeh Chami in Washington. The headquarters of the international financial institution is located there. Chami had traveled there to seek advice on “technical assistance” in implementing the reforms requested by the IMF.

Chami emphasized that a number of reforms still had to be approved by the Lebanese parliament before the IMF was ready to agree to an agreement with Lebanon on financial assistance. According to him, the necessary reforms include a capital control law, some changes to the law on banking secrecy and a law on the restructuring of the banking system.

The Lebanese politician warned that there could be negative consequences if these reforms are not decided. On the other hand, its decision would give hope for a recovery and a lessening of the intensity of the crisis.

Since August 2019 at the latest, Lebanon has been in a deep financial crisis, which has steadily worsened due to the corona pandemic, the explosion in the port of Beirut in August 2020 and the war in Ukraine. About 70 percent of the population live in poverty.

More on the subject – Saudi Arabia wants to resume relations with Lebanon, which is badly hit economically