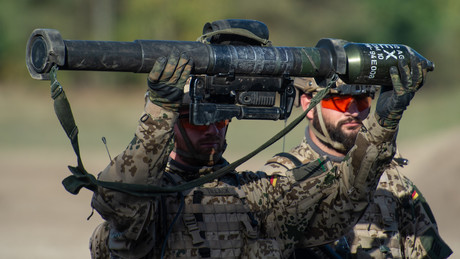 Panzerfausts, anti-aircraft missiles, machine guns and many millions of rounds of ammunition: since the beginning of the war, Ukraine has received armaments from Germany worth more than 190 million euros. However, the total scope could be larger, since not everything is recorded anymore.

In the first eight weeks of the war, the federal government delivered weapons and other armaments worth at least 191.9 million euros to Ukraine. This emerges from a response from the Federal Ministry of Economics and Climate Protection to a request from Left-wing MP Sevim Dağdelen.

From the first day of the war, February 24, to April 19, the government then gave the go-ahead for the delivery of war weapons worth 120.5 million euros and other armaments worth 71.4 million euros.

Due to process simplifications, not all export values ​​are recorded anymore

However, the Federal Ministry of Economics pointed out that its figures no longer corresponded to the total scope of export licenses because not all values ​​were recorded due to process simplifications. Dağdelen called it “a mockery of Parliament” that the federal government did not provide full information about the value of the armaments expert. She also called it “extremely dangerous” that Germany was becoming “in fact a war party” by supplying arms to Ukraine on an ever-increasing scale.

The United States, for example, has promised or has already delivered arms and ammunition worth more than 3.7 billion US dollars (around 3.5 billion euros) to Ukraine since the beginning of the war. According to the government, little Estonia has so far provided military aid worth more than 220 million euros to Ukraine. Among the weapons supplied were US-made anti-tank mines and Javelin anti-tank missiles. Estonia has 1.3 million inhabitants, Germany 83 million.

Two days after the Russian attack on Ukraine, the German government decided to deliver weapons to the war zone – breaking a taboo. Initially, the federal government announced which weapons it was supplying, but not for a long time. Members of the Bundestag can only obtain information about this from the secret protection agency.

According to information from Ukrainian government circles, a good 2,500 anti-aircraft missiles, 900 rocket-propelled grenades with 3,000 rounds of ammunition, 100 machine guns and 15 anti-tank grenades with 50 rockets had arrived in Ukraine by April 21. In addition, there are 100,000 hand grenades, 2,000 mines, around 5,300 explosive charges and more than 16 million rounds of ammunition of various calibers for small arms from assault rifles to heavy machine guns.

Last week, the federal government approved the export of heavy weapons directly from Germany for the first time: 50 Gepard anti-aircraft tanks. The delivery of Panzerhaubitzen 2,000 from Bundeswehr stocks is also under discussion. These are heavy artillery pieces that can shoot 40 kilometers away. The delivery of Western-style main battle tanks such as the Leopard from Germany to the Ukraine is not yet planned.

More on the subject – Melnyk to Germany: We want 88 Leopard tanks – and World War III is already underway