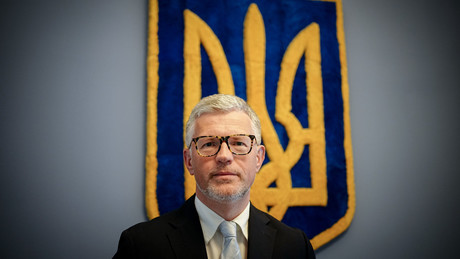 Chancellor Olaf Scholz has ruled out a trip to Kyiv for the time being – the German Federal President’s disinvitation is standing in the way. The Ukrainian ambassador Andrei Melnyk now describes him as “offended liverwurst”. It is not the first time that the diplomat has snubbed actors in his host country.

Ambassadors have a great responsibility. After all, their job is to represent their country to the host country and to promote intergovernmental relations between the two countries – normally. For the Ukrainian ambassador in Germany, Andrei Melnyk, the rule of diplomatic composure does not seem to apply. Instead of expressing gratitude for the provision of military equipment and financial aid, the ambassador prefers to rail against high-ranking representatives of the country that is providing this aid to Ukraine: his host country Germany.

Melnyk’s latest diplomatic gaffe hit Chancellor Olaf Scholz (SPD), who had previously announced that he did not want to travel to Ukraine for the time being. “Playing an offended liverwurst doesn’t sound very statesmanlike,” the Ukrainian ambassador scoffed at this decision in an interview with the dpa. “It’s about the most brutal war of annihilation since the Nazi attack on Ukraine, it’s not a kindergarten,” says Melnyk.

Scholz had said on ZDF on Monday evening that Federal President Frank-Walter Steinmeier’s unloading through Ukraine would stand in the way of his trip. Steinmeier actually wanted to go to Kyiv with the heads of state of Poland, Latvia, Estonia and Lithuania in mid-April, but was rejected at short notice. The SPD chancellor said:

“It cannot work that a country that is providing so much military aid, so much financial aid that is needed when it comes to the security guarantees that are important for Ukraine’s time in the future, that you then says the President can’t come.”

Ukrainian President Vladimir Zelenskiy would still be happy to receive Scholz in Kyiv, Melnyk said. However, the ambassador added:

“What Ukraine would look forward to much more than any symbolic visits is that the traffic light government will swiftly implement the Bundestag’s proposal for the delivery of heavy weapons and fulfill the promises made so far.”

Scholz firmly rejected the allegation of hesitation on Monday evening. “I always decided quickly, together with everyone else, coordinated with the allies,” he said on ZDF. “But my course is that we act prudently and with a clear mind,” since many Germans feared a far-reaching escalation of the war, said the Chancellor.

“You’re right to have these concerns.”

A direct involvement of NATO in the war is not an option for him, assured Scholz.

However, Melnyk’s sharp criticism of Scholz was not the first of its kind. The Ukrainian ambassador has described Scholz as a “coward” in the past because he spoke out against the delivery of heavy weapons to Ukraine for a long time.

The absence of the two top German politicians, Steinmeier and Scholz, from the Federal Press Ball last Friday was also “inappropriate” because the ball this year was all about Ukraine. “No Federal President. Not a single member of the traffic light government at the solidarity ball for Ukraine & freedom of the press. Because that is ‘inappropriate’ in a war. Double slap in the face of the media & a devastating signal to Kyiv. It’s a shame,” wrote the Ukrainian ambassador on twitter.

No President. Not a single member of the traffic light government at the Solidarity Ball for Ukraine & Press Freedom 🤦‍♂️Because that is “inappropriate” in war. Double slap in the face of the 🇬🇧media & a devastating signal to Kyiv. Too bad https://t.co/se00VlbsWrpic.twitter.com/8VdW9SxnLq

The prominent authors of one published in Emma magazine open letters to Chancellor Scholz, in which the authors warn of the danger of a third world war in the event of further deliveries of heavy arms, Melnyk alleged on Twitter that “he had learned nothing from history.”

These celebrities who want to ban heavy weapons from Ukraine and thus only play into the hands of the murderer Putin so that he can bomb 🇺🇦women and children, have trampled on the principle of “never again”. Learned nothing from history. sad https://t.co/75PuSgvLwmpic.twitter.com/QpIb9b6lsX

In contrast to Germans, Ukrainian celebrities would “not give any stupid, immoral advice” and instead would “take action” themselves in the war zone, added the ambassador, who is not exposed to the dangers of war in Berlin itself.

We are PROUD of Ukrainian celebrities who don’t give stupid immoral advice like Schwarzer, Walser, Kluge, Nuhr, Yogeshwar & Co., but TACKLE it themselves https://t.co/XmszOocGhu

But his biggest angry speech to date was still directed at the former Merkel adviser and former Bundeswehr general, Erich Vad. He had said on the Maybrit Illner talk show that Ukraine’s dealings with Germany depressed him greatly. He also doesn’t think Ambassador Melnyk’s actions are right. According to Vad, Ukraine owes Germany more gratitude. The Ukrainian diplomat replied that Vad was a “pathetic loser” who “knows nothing about war.”

What depresses me a lot is that pathetic losers like Vad, who have no idea about the war (“from a military point of view, the thing is over, it will only last a few days and no more”) always get the big stage instead of fishing walk. It’s not OK https://t.co/S9EDz2GA8xpic.twitter.com/Xt40vBDVLw

In Germany, however, Melnyk’s sometimes insulting statements are increasingly causing outrage. The FDP member of the Bundestag Marie-Agnes Strack-Zimmermann asked the Ukrainian ambassador on Tuesday to apologize to the Federal President. The Ukraine has uninvited Frank-Walter Steinmeier and now cannot expect Olaf Scholz to travel to Kyiv, the chairwoman of the defense committee told the newspapers of the Funke media group:

“Perhaps, Mr. Melnyk, one should simply apologize to the President and then politely invite the Chancellor to come.”

AfD faction leader Tino Chrupalla even goes one step further and demands consequences. First the President of Ukraine invited the Federal President, now the Ambassador insults the Chancellor, Chrupalla criticized. “Such provocations and insults by constitutional bodies cannot be accepted idly. The federal government must summon Ambassador Melnyk immediately,” demanded the AFD politician in an interview with the DPA. Should Melnyk show no understanding, the government must insist on his immediate dismissal, Chrupalla said.

What Melnyk obviously misses from his numerous insultingly worded and ultimately war-driving demands is that such a war would also have serious consequences for his host country Germany. As in Ukraine, in the end it will be the normal population who will have to bear the concrete consequences. One should therefore expect diplomacy from an ambassador, not provocation.