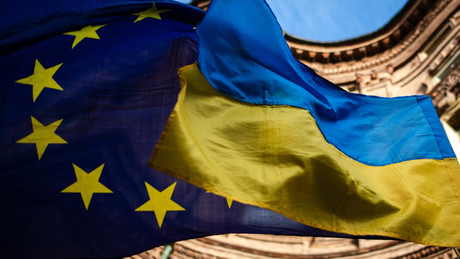 In addition to the open war against Russia, Washington is also waging a covert war against the European Union, says Vladimir Prokhvatilov. Europe is threatened with economic and migration policy major crises.

The United States is on course to provide Ukraine with as many weapons and military equipment as possible. Their goal is clear: to impose a war of attrition on Russia and to weaken it as much as possible. Ukraine and its citizens act as expendables in this context. As part of the Pentagon concept of a multi-domain war, an information, movement (combat) and resource war is being waged against Russia. That’s no secret. However, so far nobody suspects anything about the secret war of the USA against the European Union.

Meanwhile, the European Union is a dangerous civilizational and economic competitor to the United States and fellow traveler Britain. At the moment, Americans are succeeding in turning the European Union into their own crypto colony. They urge Europe to give up Russian oil and gas and advise getting used to overseas energy sources.

Currently, the United States is reducing its shipments of liquefied natural gas (LNG) to the Asian markets in favor of Europe. According to a statement on the White House website, the United States has agreed with the European Union to ensure the delivery of at least 15 billion cubic meters of LNG to Europe this year to replace Russian exports. “The parties have decided to create a joint working group to reduce Europe’s dependence on energy imports from Russia. The US imposes a strict condition on the European Union: ‘Europe must pay a premium for the fuel, thereby fulfilling the demand of Asian consumers ‘” writes Forbes.

On March 25, under pressure from the United States, Germany “presented a plan to virtually stop importing Russian energy resources by mid-2024,” Bloomberg reported. Federal Economics and Climate Protection Minister Robert Habeck emphasized that the country wanted to reduce imports of Russian oil by the middle of the year and become “almost independent” of it by the end of 2022. Germany could also curb imports of Russian coal by the fall. Against the background of US and EU sanctions on Russian energy exports, Russia is successful in redirecting US and EU oil and gas exports to Asia, which in the near future will become an “economic shock” for the whole world and in particular for the Old World, writes Britain’s The Guardian. The “economic shock” lies in the price premium for American gas, which the Europeans are forced to pay for the LNG.

The European gas market is the backyard of the global LNG market because it is entirely dependent on the Asia Pacific (APR) economic cycle as the Asian market is physically far larger. When LNG prices fall in Asia, prices in Europe follow, and vice versa. The diversion of US LNG flows to Europe will cause gas prices in the Asia-Pacific region to rise, and US gas carriers will turn back to Asia if the EU fails to meet the above US condition – for gas at a surcharge to pay. Ultimately, the European Union will be forced to give up Russian natural gas and pay absolutely astronomical money for electricity and heat.

The European economy is already on the verge of collapse. A complete abandonment of Russian energy sources will be a real disaster for the European Union. Against the background of the growing economic crisis, the largest American investment funds such as BlackRock and Vanguard have bought into all major European industrial and financial structures. And if the public in France may be outraged by this unfortunate fact, in Germany it is the other way around, as if the mouth were full of water.

The United States also opened the second front of the civilizational war against the Old World – the migration front. Pro-American henchmen at the helm of EU states are ignoring another uncontrolled wave of immigration. European elites have largely had their will and European states have lost their ability to act in relation to their immediate interests. When Europe was overwhelmed by a huge influx of refugees from Syria in 2017, the European Union, under pressure from public opinion, long refused to accept hundreds of thousands of migrants from the Middle East. However, the American consulting firm McKinsey, which has close ties to the CIA, has pushed its way through European bureaucrats and developed the logistics for receiving and housing as many as a million new migrants in Europe.

Many immigrant communities from the countries of the Islamic world, many of which have formed in Europe over the past half-century, are now well organized and de facto self-governing. Muslim communities in the Old World today solve almost all domestic problems on their own. Numerous Muslim private schools even manage to receive state subsidies. Muslim diaspora take control of drug trafficking from traditional European mafia. Many Muslim communities in Europe are already isolated from local authorities as they receive substantial funding from Qatar, Saudi Arabia and Turkey through mosques, cultural centers and charities.

Chaos and unrest in the EU states becomes even more likely against the background of millions of emigrants from Ukraine, the number of which is growing exponentially today (March 1 – 0.68 million; March 16 – 3.2 million; April 1 – April 4). .2 million; April 7 – 4.4 million), and if this upward trend does not change, more than 10 million people may have emigrated from Ukraine by the beginning of the summer. Europe is facing a huge humanitarian catastrophe that no financial injections can stop. The energy crisis and the resulting industrial crisis are increasing. As the European Union obediently emulates the United States, the economic situation will continue to deteriorate because Europe will pay a higher price for American energy resources than for the same from Russia. In the medium term, the European Union will find itself on the brink of civil war. And the United States will achieve its strategic goal by weeding its chief civilizational competitor from the geopolitical arena.

More on the subject – New record high – inflation in the euro area rises to 7.5 percent