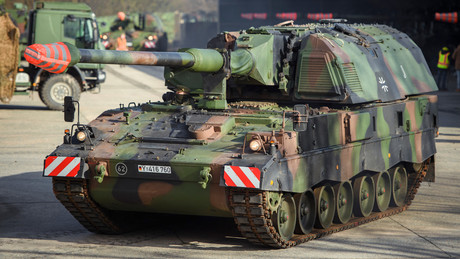 Germany is now supplying heavy weapons to the Ukraine after all: Federal Defense Minister Christine Lambrecht announced the delivery of seven self-propelled howitzers in 2000. According to the Bundeswehr, this heavy artillery system is one of the “most modern artillery pieces in the world”.

Germany will deliver seven Panzerhaubitz 2000 to Ukraine. An agreement has been reached on this, said Federal Defense Minister Christine Lambrecht on Friday in Sliač during her visit to Slovakia. The weapon systems should come from ongoing repairs and should therefore not be immediately lacking in the Bundeswehr. Training should be offered for howitzers.

The Self-Propelled Howitzer is a heavy artillery system with a cannon mounted on a tracked vehicle – resembling a tank. At the end of March, the Bundestag had demanded the delivery of heavy weapons to Ukraine and decided on a joint application by the Union and the ruling traffic light parties. Lambrecht had also promised a delivery of anti-aircraft tanks Gepard, of which the manufacturer KMW still has 50 units in stock. The supply of heavy weapons has long been controversial.

With standard ammunition, the self-propelled howitzer can fire from a distance of 30 kilometers, with range-enhanced ammunition 40 kilometers are possible, according to the Bundeswehr. The gun crew can therefore fire up to six shells in such a way that they hit at the same time. Is detected:

“The Panzerhaubitze 2000 is one of the most modern artillery pieces in the world. Its strength lies in its precision and in its large combat distance.”

Internal military circles had also raised concerns about handing over the weapon system from their own stocks. Alliance obligations and the feared limitation of their own fighting ability were cited. The Bundeswehr had already brought six of its 2000 self-propelled howitzers to Lithuania, where they are reinforcing the German-led NATO battle group.

More on the subject – So far, Germany has supplied weapons and equipment to Ukraine worth more than 190 million euros