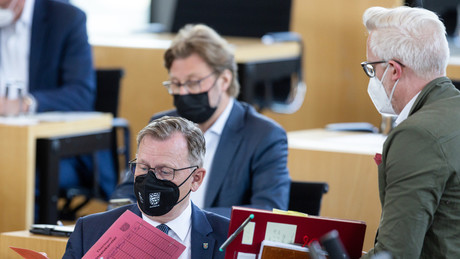 Whether the Corona crisis or the Ukraine war: Thuringia’s Prime Minister Bodo Ramelow likes to polarize and loudly. Now he is attacking Russia’s President Vladimir Putin, who is playing down National Socialism by talking about “the alleged ‘denazification’ of Ukraine.”

Thuringia’s Prime Minister Bodo Ramelow (left) wants to give Russian President Vladimir Putin a history lesson. The 66-year-old accused Putin of trivializing National Socialism. Like t-online reported, Ramelow railed on Saturday with a view to the commemoration around 8/9. May:

“His history-forgotten lie about the alleged ‘denazification’ of Ukraine plays down the crimes of National Socialism and exploits the achievements of the Soviet army – not only in the liberation of the Auschwitz death camp – for Putin’s expansionist agenda.”

From this the convinced Protestant concludes:

“Putin is wrong and the world knows it. […] On May 8th we commemorate the day of the liberation of Europe and the world from National Socialist barbarism. We owe it to the Allied troops that the German war roller and the genocide of the Jews and Sinti and Roma could be stopped.”

Ramelow added: This year this day will be overshadowed by Putin’s illegal war against Ukraine. He summed it up: “We have to realize that it was Russian and Ukrainian soldiers, but also soldiers from many other nations, who together in the Soviet troops stood up to Hitler’s Wehrmacht. With his attack on Ukraine, Putin is trampling on this common history.”