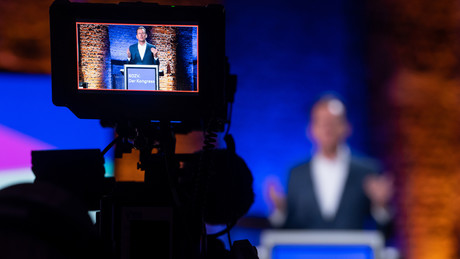 The Goethe University in Frankfurt am Main is currently reviewing the doctoral thesis by Axel Springer boss Mathias Döpfner because of suspected plagiarism, as the university confirmed on Friday in response to media inquiries. Buzzfeed and Der Spiegel had also reported on it. According to two professional plagiarism checkers, Döpfner copied entire passages in his work and violated scientific standards.

The 59-year-old has been CEO of Axel Springer for more than 20 years and publisher of Bild und Welt. He is also President of the Federal Association of Digital Publishers and Newspaper Publishers (BDZV). In 1990 he was promoted to Dr. phil. received his doctorate. In February, the plagiarism searcher Martin Heidingsfelder asked the university for a formal investigation, as reported by Spiegel. Accordingly, Döpfner’s bibliographical references were objectionable, and the sources and secondary sources were often not sufficiently named. The plagiarism searcher Stefan Weber speaks of a so-called structural plagiarism and comes to 28 suspicious passages in the dissertation.

Heidingsfelder refers in particular to a source that Döpfner is said to have unscientifically used for his bibliographical references. This source was a work by Helmut Andres from 1938, according to which music criticism should have benefited qualitatively from the National Socialists. On the one hand, Döpfner distances himself from Andres, as Der Spiegel writes, but at the same time, according to the two plagiarism seekers, Döpfner copied Andres, sometimes literally, sometimes analogously, or in terms of structure and composition.

The Frankfurt University of Applied Sciences now said: “The Goethe University was approached with an allegation of scientific misconduct in connection with the dissertation ‘Music criticism in Germany after 1945: Content and formal tendencies – a critical analysis’ by Mr Dr. Mathias Döpfner is leaving.” The facts were submitted to a university committee for examination.

A company spokesman for the Axel Springer media group said when asked by the dpa: “Mathias Döpfner has been informed about the process. He has full confidence in the work of the Frankfurt University commission.” The university also announced that according to the statutes, the procedures before the commission for dealing with scientific misconduct are absolutely confidential. No information was given about the duration of the process.

Döpfner is one of the richest and most influential publishers in Germany. Thanks to a donation from Friede Springer in 2020, he became the third-largest shareholder in Axel Springer with around 22 percent. The largest shareholder with almost 48 percent is the notorious US investor Kohlberg Kravis Roberts & Co, whose founders are pioneers of company takeovers through private equity. Döpfner’s private fortune is estimated at over a billion euros and can also be admired in the form of several villas and magnificent buildings between Berlin and Potsdam.

Springer-Verlag includes Die Welt, Welt (a television channel, formerly N24), Business Insider, Politico, Fakt and die Bild. Due to the repeated disregard of the press code, a large number of reprimands by the press council to the Springer-Blatt were again made in the past year picture been distributed – with 26 of a total of 60 complaints, Germany’s largest tabloid was dubbed the “Rügenpresse”. Döpfner himself was also criticized in the affair surrounding ex-Bild editor-in-chief Julian Reichelt because, according to research by Financial Times journalists Erika Solomon and Olaf Storbeck, his misconduct had long been known internally and the board of directors tried to cover it up. Instead of clarifying the allegations of abuse of power against employees and the use of drugs at work, Döpfner wrote a private text message to the writer Benjamin von Stuckrad-Barre in March 2021 and ironically described Reichelt as the “last and only journalist in Germany” who was still courageous against the “new, authoritarian GDR state”.

Döpfner is also one of the signatories open letters, in which this week a number of publicists and writers, in reaction to the recently published open letter from opponents of continuous arms deliveries to Ukraine, on the contrary advocate strengthening Ukraine’s defense capability, including through heavy weapons. The signatories are also calling for economic sanctions to be extended to energy sector.